Six compaction rollers from Dynapac are working on a new earthfill dam project in Malaysia.

Malaysia's Loh & Loh Construction has started construction on the first of two dams on the Hulu Terengganu hydropower project, employing its recently expanded compaction fleet including six Dynapac CA300D's and CA610D's - the first in Malaysia.
The Dynapac compaction rollers - four CA300D's and two CA610D's and the first in Malaysia - have been delivered to Loh & Loh Construction Bhd for the project with its joint venture partner Sinohydro Corporation.
Having completed almost 40km of access roads across the project site, many at 20° - 30° gradients and several at 40°, the rollers began work compacting the 70m high x 700m long earth and rockfill dam in June; one of two dams on the project. Work is expected to start on the second dam, a 30m high RCC dam later this year.

The Hutu Terengganu hydropower project is located in the upper reaches of the Sungai Terengganu north of the existing Kenyir dam in Kuala Berang (60km west of Terengganu).
In a contract awarded by The Malaysian Power and Energy Agency, TNB (Tenaga Nasional Berhab), the project will include two dams and the installation of turbines and generators in an underground power station with a total capacity of 250MW.
It will also include two storage reservoirs - the 6000 ha Puah Lake and the 130 ha Tembat Lake - and an 802m diversion tunnel between both lakes.
Other construction will include two intakes, one at each reservoir; two unlined low pressure diversion tunnels to carry water flows from the reservoirs to the drop shaft; and two surge shafts close to the top of the drop shaft.
Two high pressure, steel lined penstock tunnels will carry flows from the drop shafts to the powerhouse. A 1.3 km long concrete lined, free flow tailrace tunnel will carry the flow downstream from the powerhouse to the Tasik Kenyir.
A 2.2 km long transmission line will connect the power station to the existing Kenyir-Tanah-Merah line.

With the cofferdam completed in May and the river successfully diverted, work on the 700m long earth and rockfill dam had got underway by June 2012.
The dam is being constructed between two peaks over a distance of 700m and 70m high. At the base, the dam will be 200m wide reducing to 10m at the top being laid in seven 10m high slopes.
Soil layers 3m deep are being laid and compacted to a final depth of 2.5m by the Dynapac rollers.
Only recently introduced, the Dynapac rollers are the first in Malaysia.
The CA610D is the top of the range single drum vibratory roller designed to meet full rock fill capacity in the most arduous, heavy duty compaction on blasted rock and most types of soil and clay masses.
A 21,000kg class roller it features a 2130mm drum width and a 14,050kg front module mass.
The CA300D has been designed for long working schedules in tough applications. It features a static linear load of 38 kg/cm and has a 12,530 kg operating weight.
Both models also feature PD Shell kits for easy fitting and conversion from smooth drum vibratory operation to perform pad foot duties in softer compaction conditions.
According to Loh & Loh's on site Plant Manager: "The Dynapac rollers had performed very well during paving duties on the access roads even when required to work on gradients of 20º and even up to 40° - thanks to the Cummins QSB Series of low emission engines offering impressive power reserves and faster load acceptance."
Also on the hydropower project a sub contractor has recently taken delivery of a Dynapac CA610D single drum vibratory roller.
On delivery of the new rollers, Dynapac, through its Kuala Lumpur-based offices provided several onsite training courses for the operators to ensure improved operation of the rollers.
The KL office also continues to provide regular onsite routine maintenance procedures on all six rollers.
Scheduled for completion by the end of 2015, the project will meet peak load capacity in order to meet the ever increasing power demands using renewable energy and, at the same time reduced carbon emissions. 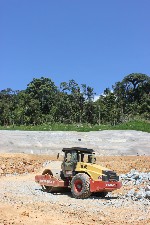 Soil layers 3m deep are being laid and compacted to a final depth of 2.5m by the Dynapac rollers.
Post to: