Tasmania’s extensive hydropower system has powered the state with clean energy for over a century. Generation started at its first power station at Waddamana in 1916 and the company now owns, operates and maintains a large and complex hydropower system including 30 hydropower stations, 54 major dams and 45 major lakes. It generates more than 9000GWh of renewable energy every year, balancing this with providing paddlers, rowers and anglers access to the lakes, rivers and lagoons they enjoy for a variety of recreational uses.

With the development of Hydro Tasmania’s Battery of the Nation initiative to maximise capacity and flexibility in the existing hydropower system, and add new pumped hydro storage through building Tasmania’s first pumped hydro project, Chief Executive Officer Ian Brooksbank said that Australia “was on the cusp of the most critical transformation the electricity industry has ever experienced”.

Two flagship projects for Battery of the Nation are a potential redevelopment of the Tarraleah hydropower scheme in Tasmania’s central highlands and a new pumped hydro scheme at Lake Cethana in the North West. With detailed support from the engineering team at Entura, Hydro Tasmania has been investigating these projects and their potential role in Australia’s clean energy future.

“The future market will need renewable energy sources like hydropower that can respond quickly to changes in power demand. It’s an opportunity to future-proof the Tarraleah scheme and optimise it for a bigger role in Australia’s clean energy transition,” Brooksbank said.  “This is a great example of how existing hydropower assets can be repurposed to deliver more value from the same water resource, and better align to future market opportunities.”

Lake Cethana was selected as Hydro Tasmania’s preferred site of the top three Tasmanian pumped hydro opportunities. Cethana is a 750MW project with up to 20 hours long storage duration.  Deep storage capacity, greater cost certainty, environmental and social sustainability and flexibility in sizing and capacity made Cethana the preferred site to finalise feasibility.

As champions of a renewable energy future, Hydro Tasmania has done extensive work to help communities reduce reliance on fossil fuels and diesel generation and embrace clean sources like wind and solar. It has successfully delivered many innovative hybrid energy solutions to remote communities, integrating renewable energy and other enabling technologies to improve the quality of supply and reduce dependence on diesel generation.

The King Island Renewable Energy Integration Project is a great example of this and the project resulted in the development of a world-leading hybrid off-grid power system capable of supplying a significant proportion of King Island’s energy needs using renewable energy. 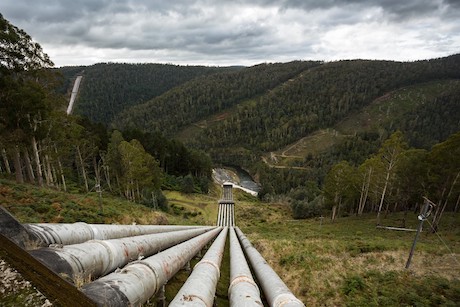