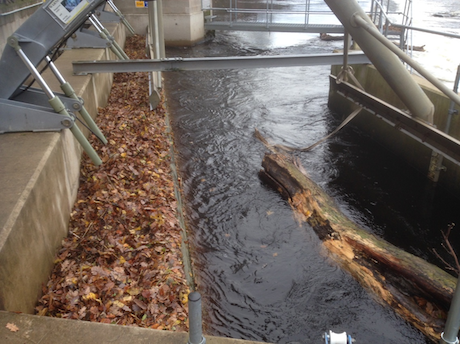 Halton Lune Hydro is England’s largest community-owned hydro scheme. Sitting downstream of the Crook O’Lune, on the River Lune, just north of Lancaster, it uses two 100kW rated Kaplan drop turbines to produce over 750MW of energy per year. This is enough energy to power over 300 homes and displace approximately 500 tonnes of carbon per year, using a low head (<2m)/high flow principle.

Forge Weir was historically a pre-Victorian structure providing a head of water to multiple waterwheel-powered mill buildings on the north bank of the river. In the late 1880s, a local company, Gilkes of Kendal, installed early turbine powered generators on this site which survived in use until the early 1930s.

The concept for the proposal to redevelop this site was defined by Halton Community Association between 2008-10, when work was being planned on an expanded community centre in the village, with the aspiration of including as much green energy as possible. Early feasibility costs were not easy to find, but over three years our project definition took shape, and the possibilities and limitations of the site were better understood. The scheme as eventually built did not feed into the centre but was fed instead into a much closer co-housing development on the riverside.

The hydro was built largely on volunteer hours from many people in our local community and driven by a professional electricity generating engineer, a water specialist civil engineer and a voluntary sector chairman with considerable project management expertise. We were fortunate that all lived in our community and were later supported by ‘green community’ experts in financing similar schemes.

The £1.72M build cost was funded through grants (£300k) and a community share offer with a 20-year payback time. The financial model also benefits from feed-in-tariffs until 2034. The scheme continues to be managed by both paid and volunteer labour. It relies on regular volunteers to assist with the fish trapping and also project-based volunteers to help with maintenance, particularly following flood waters and during annual maintenance drain down programmes.

The River Lune is exceptionally volatile, moving between the unprecedented Storm Desmond high levels in December 2015 to the 2021 summer, which provided the driest summer on the Lune in 130 years. Our team needs to respond to this constantly changing dynamic and cope with all that the river brings with it. This includes the leaf fall in winter and the harvest of logging wood that is extracted for drying and use in wood burning stoves, as well as trying to remove as much floating plastic waste as possible before the water reaches the estuary.

Our major source of concern is the difficulty of Rateable Value, given that HMRC assess this based on the installed capacity of our turbines at 200kW. The reality is that this is a theoretical maximum and our Environment Agency licence prevents us from deriving any more than 130kW, and only then under ideal conditions. Given flow changes, inlet debris and seasonal variations, we would do well to achieve a consistent 100kwW from both turbines. The resulting rates payable are at least double what might be considered reasonable and we hope that consideration could be given to changing the baseline figure.

One benefit of the project is that the surplus income that is generated goes to the Halton Lune Trust, a registered charity which provides grants to give public benefit in the Halton-with-Aughton Parish. This provides a renewable source of grant funding for local projects and is administered by local trustees. In 2021, £13,760 went into the community through the trust and this is expected to rise to £50,000 annually by 2031. 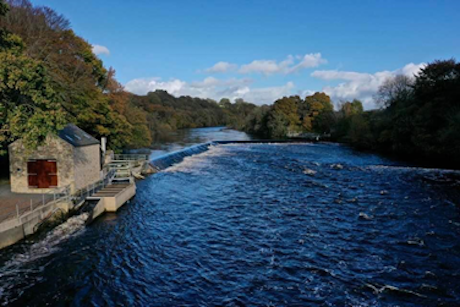 Forge weir in full flow, with the turbine house(left) and the Lariner fish pass flowing past the building