High-tech fish surveys making a splash in the Himalayas

Nepal’s inland water resources are among the most ecologically diverse and plentiful in the world. Nearly 200 indigenous and over ten exotic fish species come from the Himalayan waterways that encompass about 6000 rivers flowing over 45,000km. Human threats, including hydropower, are challenging the future of fish that migrate through Nepal’s rivers for spawning. New non-invasive technologies for genetic monitoring of fish species within an ecosystem, or Environmental DNA (eDNA) are helping researchers with new sampling methods that are efficient, accurate and cost-effective, making understanding fish species potentially impacted from hydropower schemes easier.

In Nepal, hydropower projects are required to conduct environmental impact assessments (EIAs), which commonly includes documenting and identifying fish species that may require mitigation actions to maintain their populations in the basin. But, documenting fish in the fast flowing, cold snow-fed rivers of the Himalayas is often a challenging and dangerous task.

Traditionally, cast nets operated by local fishers, are the common method for catching fish in Nepal’s rivers. Small fish along the edges of Nepal’s rocky and fast-moving rivers can be caught this way, but this is not effective for larger fish. Likewise, the hook-and-line method for catching larger fish is not efficient.  Gill nets, which catch fish by their gills, can be effective but are difficult to set up in the raging rivers.

The International Finance Corporation (IFC) is partnering with the Centre for Molecular Dynamics Nepal (CMDN) to test an emerging method -Environmental DNA, commonly known as eDNA in the rivers of the Himalayas. This innovative tool for non-invasive genetic monitoring of biodiversity could change how companies document fish in river basins.

eDNA allows researchers to identify species present in a river by sampling and analysing the genetic material (DNA) from fishes (and other aquatic organisms) that is shed into the water through metabolic wastes, damaged tissue or lost scales. This genetic material can be collected easily in one scoop of water.

The eDNA process starts with a sample of water collected from the river. This water is gravity filtered to capture DNA from the water on special filter paper. The filter paper is then stored in a buffer solution and taken to the molecular laboratory, where the DNA are amplified (many more copies made) and then sequenced, revealing the DNA of a multitude of organisms that are living in the river, including fish, insects, molluscs, plants, plankton, and bacteria.

These DNA sequences are then compared to known DNA sequences from global databases to find matches and identify species living in the river. Since 2016, CMDN and USAID has been creating a database of fish DNA for Nepal based on sample collections from the Karnali River to be used as the reference DNA collection.

In March 2018, IFC and CMDN began a test project using eDNA to document fish species in Nepal’s Trishuli River Basin. This work is part of a cumulative impact assessment designed to better understand the impacts of multiple hydropower projects on ecological and social aspects of the basin. eDNA will be used to identify fish of conservation, commercial and culture importance. The information gathered from the cumulative impact assessment will also be used for the EIAs of IFC clients Upper Trishuli-1 HPP and Super Trishuli HPP as well as potentially other hydropower plants on the Trishuli River.

A team of about 20 researchers headed to the Trishuli River to test the eDNA methodology and to compare its efficiency to traditional fish sampling methods. The field team consisted of:

They sampled seven sites across the Trishuli Basin and at each one filtered eight water samples for eDNA analysis, sampled fish using cast and gill nets, sampled macroinvertebrates and periphyton (algae etc.) and took measurements of water quality (temperature, dissolved oxygen levels, pH, turbidity, etc.). The eDNA samples were taken back to the CMDN laboratory where they will be analysed over the next two months. The team is meanwhile working on analysing the other data for a full report. A key component of this work is the sharing of information between scientists across the Himalayan region and capacity building of Nepalese students.

In the field, the sampling collection team faced many challenges. Some collection sites were located at points of deep and strong river currents, with few points of access. Armed in life jackets with ropes around their waists, the team climbed huge boulders and scaled down steep banks to reach the river, where they could only sample along the river’s edge. Local fishers supporting the team tested the waters for more favorable sampling sites, which were deemed too dangerous.

Weather also created hurdles. After heavy rain one evening, the Trishuli River turned to a flow of brown highly turbid water, which made sampling more difficult. On top of this, road construction alongside the river was dumping truckloads of soil directly into the river creating high sediment loads in the river. Water filtering for eDNA, which typically should take ten minutes per sample, required 30 minutes or more per sample due to the sediment load. In some key tributaries only a trickle of water was running through. These areas are important breeding grounds for many of the fish species that need to be better understood.

The Trishuli River in Nepal: the sampling collection team faced many challenges 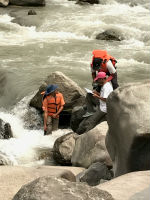 Armed with life jackets and ropes around their waists, the team climbed huge boulders and scaled down steep banks to reach the river 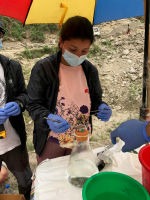 Filtering water samples for eDNA in the Trishuli River Basin.

Measurements of water quality were taken

The field team consisted of a variety of biologists and ecologists, plus Nepalese student interns