Hydro projects get a lift

Cranes and hoists are playing a large role at a number of dams and hydro projects worldwide. A look at their work on the Belo Monte Dam in Brazil, the La Vegona hydroelectric project in Honduras and the Baixo Sabor hydroelectric plant in Portugal.

Fleets of cranes are playing a major role at a number of large hydropower projects worldwide. For example, a sizeable fleet of Grove cranes has been engaged to help build the world's third-largest hydroelectric project: the Belo Monte Dam, in Para, Brazil. Located along the Xingu River, the new dam will produce an expected 11,000MW of power, making it the second-largest source of hydroelectric power for the country.

On the job are 14 Grove RT540E cranes, 4 Grove RT890E cranes, 3 Grove RT765E-2 cranes and 2 Grove RT9130E-2s. The cranes are dispersed among the project's four job sites. All of these rough-terrain cranes are configured with both the main and auxiliary hoists and jibs.

Also on the job site, four 9.5t (10.5USt) capacity Grove Yardboss YB4411 industrial cranes are assisting in the maintenance of the more than 1000 machines on site, including earth movers, cranes, trucks and forklifts. This crane offers 11.6m (38ft) maximum tip height and a compact footprint, which enables it to fit into tight working quarters.

The Belo Monte Dam project is so large and is located in such a remote area that the crane's first project is to build factories that will make the tools needed for the dam's construction. One such task was to help construct a concrete factory located directly on the job site. The factory will produce concrete that will fill the walls and other structural sections of the dam.

Gustavo Attencia, CCBM engineer, explained how pleased the construction teams have been with the cranes, which are working in challenging conditions.

“The Grove cranes are performing really well on this tough job site," Attencia said. "The terrain where the cranes are working is extremely rough and the streets are narrow. The 4x4 drive mode and the four steering modes (front, rear, crab and coordinated) are not only must-have features, but also make the cranes' operation much easier on the job site. Also, the Yardboss's compact shape and flexibility are perfect for work on maintenance areas."

Due to the size and nature of the project, a Manitowoc Crane Care branch has been built on the job site for added efficiency. Well-stocked with parts and knowledgeable technicians, the Crane Care team has ensured crane operations have run smoothly.

Claudio Marquetti, corporative equipment manager for CCBM, said the cranes are well-suited to the challenging nature of the job site and have performed with excellence.

“With so many cranes working at the same location, you might expect a few problems," he said. "However, the cranes have been running smoothly. Manitowoc cranes are quality, hard-working machines that are easy to run, maneuver and repair. For such a huge project, we feel confident that we made the best choice possible by choosing Manitowoc cranes."
The cranes were supplied to CCBM by Manitowoc Cranes Brazil.

Also in South America, Tower crane consultant Van Doorn has worked with Compañía Hondureña de Energía Renovable (Cohersa) on the La Vegona hydroelectric project in Honduras. The company helped to erect, climb and dismantle the tower cranes, as well as supplying parts, assisting with consulting, project planning and heavy lifting involving turbines.
In May this year, the business also took part in the dismantling of the five cranes on the project, three Terex Comedil CTT331s and two CTT561s.

Van Doorn's founder and director Dayne Davis described their work on the dam: "The cranes performed many lifts during the course of the project including having to use the previously erected tower crane in order to erect the next tower crane. It took precise project management to ensure all units were positioned adequately to satisfy all lifts, not only for the project, but also for the erection/dismantle sequence. One climbing frame was used to erect all five cranes.

“The most difficult lifts associated with the project were the three 9t hydro turbines , which had to be installed with complete accuracy to insure watertightness

“The project presented many unique problems, which we had to overcome due to its location deep inside the La Vegona rainforest, located roughly two hours inland from San Pedro Sula."

The plant will provide power to roughly two million homes in the country, and aims to meet Honduras's growing power needs.

Another project which is making use of a fleet of cranes is the Baixo Sabor hydroelectric plant in Portugal. Linden Comansa's Portuguese distributor Ibergru has supplied 15 flat-top tower cranes, with maximum loads between 5 and 48t, to work on the construction of a range of different facilities at the dam.

The main plant, located upstream, is a double-curvature dam and will have a height of 123m and a width of 505m. It is being built using four 8t cranes. The assembly of two of these 10LC140 cranes was a challenge due to the difficult accessibility. In order to bring the cranes to the site large amounts of concrete were supplied, using an air transport system with cables already on the project.

Next to the upstream station, a LC5211 5t tower crane has been constructing a building that will be part of the administrative facilities of the dam. Two 5t 5LC5010's act as service cranes in the yards that serve as warehouse and workshop of the jobsite materials.

The secondary plant, of gravity type, is located downstream closer to the river's mouth. The five largest tower cranes working in this project are: two 48t 21LC750's and three 18t 21LC550's. A 5t 5LC5010 is working as a service crane, helping to manage the machinery and materials required on the site.

In addition, two Linden Comansa 18t 21LC290 cranes are working on the construction of a new 268m long and 40m high bridge. Located near the downstream plant, this bridge will allow the EN102 road to cross the river, since the current Portela Bridge will be submerged by the waters.

Its not just at new projects where crane companies are proving their worth. At the same time as studies to replace two gantry frames at the Calderwood Dam in Tennessee, US, were under way, APGI Tapoco - representing Alcoa - consulted custom crane design and manufacturing company COH about replacing four chain winches.

"Its not just at new projects where crane companies are proving their worth."

These winches enable the rotary 'eyelid-style' sluice-gates of the Cheoah Dam on the Little Tennessee River to be opened. With a capacity of 20 tonnes, each of these gates rotates on a track in an arc so as to be positioned over one of the twenty channels and to grab the lifting chains. One of the main challenges in this job was to design a system to balance the lengths of the chains and misalignments of the sluice-gates. As the new winches had to be remotely operated, all jamming during lifting had to be avoided.

There was also a manufacturing challenge: the original hoisting drums were cast, but now had to be made by machining. About 40% of the material in a round 400mm diameter bar had to be removed, the tough part being the use of a very wide propeller blade. The four machines were fully workshop assembled and tested so as to limit as far as possible any possible problems during the on-site installation by the client (and future operator).

Likewise, the load trials were also carried out in the factory, using a calibrated test bed. A year after the hoists were installed the client confirmed that all was working well, and he was satisfied with the organization and handling of the job. 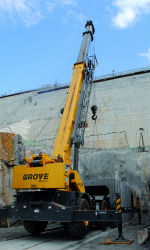 Grove cranes at Belo Monte, Brazil
COH Inc offers a range of equipment to the hydro industry
Post to: