A number of water projects are currently under construction featuring extensive underground works. Carrieann Stocks provides an update of some of the major projects underway The 900MW Nant de Drance pumped storage power plant is currently under construction in the Swiss canton of Valais, with completion planned in 2017. Machines from Herrenknecht are excavating both an access tunnel and vertical shafts, key parts of the project's underfround infrastructure. While the successful completion of the tunnelling work has already been celebrated, the shaft construction machines are still in operation.

Initially, contractor Marti Tunnelbau AG excavated an access tunnel to the machine cavern located at 1700m asl with a Herrenknecht tunnel boring machine (Gripper TBM, Ø 9450mm). The tunnel is the only safe winter access to the system during the construction phase and the subsequent operations. The Gripper TBM already proved its worth under the direction of Marti in the Lötschberg Base Tunnel project (2000-2003; Switzerland, 10km of railway tunnels) and the San Pedro project (2005-2006, Spain, 3km of railway tunnels).

Herrenknecht refurbished the Gripper TBM's drive (main bearing diameter 5088mm) at the Schwanau plant and delivered new roof bolting systems and other spare parts for the large-scale project on the high mountain jobsite. During excavation, the Swiss Herrenknecht subsidiary took over the refurbishment of the 17-inch disc cutters. The tunnel builders achieved peak performance at the end of October 2011: 220m of bored and secured tunnel in one week. At the beginning of September 2012, the tunnelling teams celebrated the breakthrough 600m deep in the mountain after 5.6km through gneiss, greywacke and granite.

In addition to the Gripper TBM, a Raise Boring Rig (RBR) from Herrenknecht was also in operation at Nant de Drance. The RBR600VF drilled two 424m deep vertical penstocks. They connect the upper Vieux Émosson reservoir with the machine cavern. Marti Contractors Ltd. managed to complete the pilot borehole (Ø 381mm) for the first shaft from the top down through rock with strengths of up to 150MPa, with best performances of up to 62m a day. The reaming (Ø 2440mm) started on 14 November 2012 and was successfully completed after only two weeks with top daily performances of up to 33m. The excavation of the second penstock (pilot borehole and reaming) with the RBR600VF began in the fall 2013.

The third machine that is currently biting through the hard rock in Nant de Drance is the new Herrenknecht Shaft Drilling Jumbo. After its commissioning in April 2013, Östu-Stettin Hoch- und Tiefbau GmbH began working downwards with the machine in two drilling and blasting rounds of 2.5m, each with 120 blast holes per day. The Drilling Jumbo will ream the shafts drilled by the RBR (Ø 2,440mm) to a diameter of eight meters using the conventional method.

A number of hydroelectric projects are in development in Chile that feature major tunnelling work. For example, Ferrovial Agroman, Ferrovial's construction subsidiary, has recently been chosen by electric utility Endesa to undertake the civil engineering work for the Los Cóndores hydroelectric plant in Chile in a contract valued at around $250 million.

The plant, located in the Maule region, 360km south of Santiago, will have an installed capacity of 150MW.

The Los Cóndores project includes the construction of a 12km intake tunnel, a machinery hall 40m high, and a shielded penstock with a 470m head. Ferrovial will also execute the underground excavation work and build the access tunnel to the machinery hall. The execution period for the project, which will begin in 2014, is four years.

"Multiconsult, in cooperation with Skava of Chile and Amberg of Switzerland, was recently awarded a contract... to provide owners engineer services for underground works at the Alto Maipo project in Chile"

Elsewhere in the country, Multiconsult, in cooperation with Skava of Chile and Amberg of Switzerland, was recently awarded a contract by AES-owned Alto Maipo Spa to provide owners engineer services for underground works at the Alto Maipo project in Chile.
The 531MW hydro project comprises two hydroelectric plants - an upper plant with a head of 1160m and a lower plant with a head of 483m. The scheme includes two underground power stations and 67km of tunnels driven partly conventionally by drill and blast and partly by TBM. Ground conditions are complex with rock cover up in excess of 2000m making for challenging conditions for underground works.

“Multiconsult was previously involved in and responsible for parts of the feasibility study for the scheme and development of tender documents," said Richard Duncumb, manager for Dams and Underground Construction in the Energy Department. "The Contract builds on this previous involvement as well as Multiconsult's world leading expertise in high head hydropower schemes and underground works."

Pumped storage in the US

Over in the US, Sacramento Municipal Utilities District (SMUD) is planning to develop the Iowa Hill pumped storage project, a 400MW scheme that requires hundreds of metres of tunnelling.

The SMUD recently awarded a team led by Jacobs Associates a $30 million Owner's Engineer services contract to oversee preliminary design and construction review services at the site of the proposed project. If constructed, Iowa Hill would be located near the town of Camino, roughly 50 miles (80 km) east of Sacramento, California. The project would proceed incrementally and only if a set of environmental, operational, and other feasibility criteria are met.

“Jacobs Associates has assembled an outstanding team to provide the Owner's Engineer services for the proposed Iowa Hill Pumped-Storage Project," said Jacobs Associates Principal Mike McRae. "Our team is thrilled to have the opportunity to support SMUD on the planning and feasibility of this major pumped-storage hydroelectric project."

A major milestone has recently been reached for redevelopment of the John Hart generating station in British Columbia, Canda, with operator BC Hydro signing a contract with InPower BC to begin construction works. The deal for the Station Replacement Project includes the construction of an innovative, underground powerhouse that will enhance public safety and improve the site's environmental footprint.

InPower BC is a special purpose project company owned 100% by SNC-Lavalin Group Inc. The company will run the project out of its Vancouver office, including working and coordinating with international team members on the specialised design and fabrication of components like generators and turbines.

John Hart is a 67-year-old generating station that has seismic, reliability and fish habitat risks. The replacement facility will be constructed over the next five years and BC Hydro will continue to operate the existing generating station during the construction phase.

The estimated cost of the project is just over $1 billion and will include: construction of a replacement water intake at the John Hart spillway dam; replacement of three 1.8km long penstocks with a 2.1km long tunnel; and construction of a new generating station and water bypass facility upstream of the existing station. The new generating station will be underground and further up the site - not directly beside the river. The project will see its capacity increase from 121MW to 132.2MW

Malaysia's capital Kuala Lumpur is a humid tropical metropolis with millions of inhabitants, but fresh water is still in demand. A new tunnel was commissioned by the Malaysian Ministry of Energy, Green Technology, and Water (KeTTHA), drawing water from the rainforest river Semantan and into the capital to address projected shortages for domestic and industrial use. In 2014, three 5.23m Robbins Main Beam TBMs successfully completed excavation of the Pahang Selangor Raw Water Tunnel, also the longest tunnel in Southeast Asia. The massive 44.6km long tunnel passes through the Titiwangsa mountain range under cover as high as 1246m and below geothermal features including hot springs.

Given the highly variable conditions including hard granite up to 200 MPa UCS, multiple fault zones, and quartz dykes, three separate TBM drives were proposed. Sections of NATM near the inlet and outlet portals were also utilized in sedimentary rock and granite. KeTTHA selected Shimizu Corporation and Nishimatsu Construction of Japan, along with local companies IJM Corp. and UEM Builders Bhd. (SNUI JV), as the contractor. The decision to use Robbins TBMs for the majority of tunneling was a clear one for the JV: "The open-type Main Beam TBM is number one in the world. I have used other machines, but this design is simpler and easier to use, and more powerful," said Mr. Nakano, Deputy Project Manager for the SNUI JV.

All TBMs recently completed tunneling for this extensive project. The first TBM excavated 11.2km, and broke through in March 2013. The other two machines excavated 11.3 km and 12.0 km and met in the tunnel in mid-February 2014. "This is something we all look forward to in the tunneling industry," said Robbins Field Service Manager, Andy Birch. "We get through all of the hard work and eventually we break through. It's a great feeling, and I'm very happy for this joint venture and for Robbins."

The machines maintained excellent advance rates throughout the project despite many challenges including fault zones, variable rock conditions, high rock temperatures, and frequent electrical storms that required machine stoppage. Due to the hot springs, water ingress at temperatures up to 56 degrees Celsius (133ºF) was recorded. Maximum rates of 49 m (161 ft) in one day, 198 m (650 ft) in one week, and 657 m (2,156 ft) in one month were nonetheless achieved -- good rates that were at least partially attributed to the early installation of fiber mortar shotcrete as primary ground support. The near-zero rebound system, with its quick set time of 30 minutes, saved a significant amount of time compared to conventional ground support methods. Developed by Japan-based Denka and MCM, the project is the first time the material has been used outside of Japan and was able to successfully stabilize tunnel walls even in loose and collapsing ground.

High-tech design was also a factor in project accomplishment. To tackle the high cover and tough geology, all machines were equipped with custom back-loading cutterheads and durable large diameter cutters - the smallest diameter cutterheads to ever be outfitted with 19-inch cutters. The machines also had streamlined operator's cabs with touch screens and wireless operation, able to stream data to site offices and to a project website for worldwide analysis. Behind each machine, Robbins continuous conveyor systems moved muck efficiently from the machine face.

Along with custom design and innovative ground support, the assistance provided by Robbins was integral to the project's success, with SNUI J stating that the field service team supported the company throughout the project. 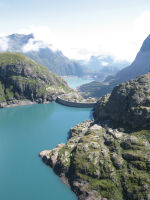