The ARC-Boat is a remote controlled boat used to deploy river, estuary and reservoir survey technology. HR Wallingford’s Dr Keith Powell and Craig Goff explain how the boat was developed, and look at how it has been delivering value for end users. Surveying rivers, estuaries and reservoirs has traditionally been an expensive, time-consuming and man-power heavy task, but things have changed for end users of the ARC-Boat. International environmental hydraulics specialist HR Wallingford developed the ARC-Boat, a remote controlled boat that is used to collect river, reservoir and estuarine data such as flow rates, depth and suspended sediment concentrations. The boat is in use internationally, and users include the regulatory bodies such as the UK Environment Agency, the Water Survey of Canada and the National Institute of Water and Atmospheric Research (NIWA) in New Zealand.

Meeting the needs of end-users

HR Wallingford started developing the ARC-Boat in 2011 in response to a request from the UK Environment Agency. It asked HR Wallingford to design a boat that would improve on the performance, reliability and ease of use of previous craft used. The two organisations worked in partnership to ensure the boat met the needs of the end-users.

The ARC-Boat's V-shaped hull was designed by naval architects to give optimal manoeuvrability and minimal air entrainment, ensuring that the data collected is of the highest quality. It can be equipped with GPS, and features a 'moon-pool' - a sealed instrument holder with an open base, that can be adapted to carry a variety of instrumentation including Acoustic Doppler Current

"The boat also has the potential to carry multi-parameter probe systems, further broadening its potential application."

The operational boat is just under 2m in length but the bow can be quickly detached from the main hull to reduce the length to 1.2m. This allows the boat to be transported in two parts, and as a result it will fit in to an average sized car, eliminating the need for trailers or specialist vehicles.

There are grab handles fitted to the upper deck of the boat that allow it to be safely deployed from the most difficult locations and the independently controlled propellers and twin rudders deliver excellent manoeuvrability even in the roughest conditions. The boat employs an industry standard remote control with a range of up to 200m and Bluetooth communications for data transmission to an onshore laptop.

“The ARC-Boat has delivered real operational efficiencies for us," explains Nick Everard, technical adviser in the Environment Agency's hydrometry and telemetry team. "It's extremely easy to set up and operate, so we can now survey more sites in less time. Before the ARC-Boat was available, it would take four or five people a full day to survey just one site. Now it's possible for two people to survey up to six sites in a day."

As the boat can be operated by a single user, once it is in the water it is feasible for one person to complete a survey, freeing the second person to carry out additional work at the same site. As a result productivity can be increased up to ten-fold at locations where manned boats and large teams were previously needed.

"The ARC-Boat has helped to achieve significant cost savings for the Environment Agency."

The ARC-Boat has also helped to achieve significant cost savings for the Environment Agency. As it can be deployed almost anywhere on the river, survey personnel can now choose the site which will provide the best data rather than being limited to areas where they can gain easy access or appropriate infrastructure is in place. This ease of deployment has removed the need to invest in or maintain costly cableway systems - fixed structures where flow survey equipment can be pulled across a river to collect calibration data for flow gauging stations.

“Unlike the ARC-Boat, cableways are positioned at fixed locations," explains Everard. Cableways are relatively expensive to build and maintain. "A large cableway installation would perhaps cost between £50,000 and £100,000, and would need ongoing maintenance. The ARC-Boat has allowed us to shelve plans for cableway system upgrades and keep flow monitoring stations in operation where cableways have had to be removed. We have been able to improve operational efficiency and save money."

Used from the safety of the river bank, the ARC-Boat has also helped improve safety for Environment Agency personnel, eliminating the need for them to go on to the river or access bridges or other potentially hazardous locations.

Storms around the UK in December 2013 caused significant damage to a number of coastal structures. Among these were flood defence embankments in Teesside and Lincolnshire. The Environment Agency deployed ARC-Boats at both locations to assess the extent of the damage to these structures, and to rapidly provide data that could inform its plans for remedial action.

In Teesside, severe weather and a storm surge resulted in the highest tide recorded in 150 years. This caused significant damage to a flood embankment at Seal Sands near Billingham, scouring a hole in the structure that was some 70-80m across. The breach allowed large volumes of sea water in to a nature reserve listed as a biological Site of Special Scientific Interest and threatened local industry and residents.

"In both Teesside and Lincolnshire the deployment of the ARC-Boat was a great success."

As the full extent of the damage to the embankment was not visible, even at low tide, an ARC-Boat fitted with an ADCP was used overnight to survey the area in around an hour at high tide. The data collected was used by staff on site to produce a 3D map of the hole. This enabled the Environment Agency to act swiftly and effectively to repair the damage. Initially, Chinook helicopters were enlisted to bring in construction materials; later a temporary road was built to provide access by land.

“In the past, this type of survey would have been conducted by a team from a boat using instrumentation mounted on poles," Everard says. "In both Teesside and Lincolnshire the deployment of the ARC-Boat was a great success. It allowed us to carry out surveys very quickly and to collect high quality data that let us take swift action to protect these areas. Importantly, our staff could stay safely on land throughout."

The ARC-Boat also has applications in the reservoirs sector. As the UK regulatory requirement to assess reservoirs and lakes has expanded to include smaller bodies of water, HR Wallingford has uniquely been deploying the ARC-Boat to help to collect bathymetric data quickly, safely, accurately and cost effectively.

The ARC-Boat is fitted with an ADCP or echo sounder that scans the reservoir bed as the boat is guided across the water's surface. Recorded data are analysed to produce accurate depth measurement in addition to 3D maps of the entire water body. With a small amount of post-processing in GIS or 3D CAD, an accurate water volume can be determined.

In addition to the smaller reservoirs that will have to be surveyed, larger reservoirs will be able to take advantage of this new technology to assist in operations such as the creation of sedimentation models. These models inform strategies to prevent capacity depletion and to extend the lives of reservoirs through flushing, excavation, dredging etc.

Similarly, ARC-Boat surveys can be employed around submerged hydropower or draw off pipe intakes to assess sedimentation levels - a vitally important role because sediment can seriously damage turbines, or influence operation of scour pipes or water supply draw off pipes from reservoirs

With the ARC-Boat it is now possible for two Environment Agency staff to survey up to six sites a day: previously it would take four or five people a full day to survey one site. 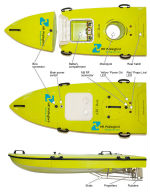 Data collected using the ARC-Boat was used to produce a 3D image showing the extent of a flood embankment breach near Boston in Lincolnshire. Image courtesy of the Environment Agency.

At Seal Sands in Teesside, the ARC-Boat was used to survey an 80m breach in a flood defence embankment.

Data collected by the ARC-Boat is wirelessly transmitted to a land based laptop. Image courtesy of the Environment Agency.
Post to: