More than a mark of assurance

For more than 20 years the Low Impact Hydropower Institute in the US has provided an independent, science-based analysis of a hydropower project’s impacts on its ecosystem.

Renewable energy has become something of a buzzword in recent years, but hydropower facilities have been renewably powering communities for over 100 years. Over the past two decades, however, there have been significant changes in state and federal regulations, policy objectives, and the general public’s awareness of renewable energy including hydropower, and its role in addressing climate change.

LIHI was created in 1999 with a three-fold mission:

LIHI received its first application for certification in 2000. As of May 2022, the Low Impact Certified portfolio now consists of 172 active certificates, encompassing 294 dams and powerhouses on 99 rivers, in 24 states across the US. In totality, this represents 4.25GW of capacity and 16,066GWh of annual generation. These projects vary from tens of kilowatts to hundreds of megawatts, with a range of operating regimes: run-of-river, run-of-release, store-and-release, conduit, and many variations therein. LIHI Certified facilities provide stewardship of over 1100 river miles, 1180 recreational amenities, and operate over 160 fish passage structures. Of LIHI Certified facilities, 94% ensure the protection of threatened and endangered flora and fauna and 64% have cultural and historic resources present that they also protect.

The LIHI Certification Handbook, which guides programme implementation, was first published in 2000 and substantially updated after over ten years of public, governing board, and staff input. These revisions reflect the ever-evolving understanding of each hydropower project’s site-specific socio-environmental impacts. The 2nd Edition Handbook, published in 2016, includes alternative methods and standards by which applicants can demonstrate that their facilities meet the LIHI Criteria. The emphasis moved away from relying solely on recommendations by governmental agencies to a focus on whether a project satisfies science-based standards for each criterion.

Initially, certificates were awarded on a two-year basis that was later extended to five years with an opportunity for an additional three years for exemplary shoreline or watershed management. Recently, the base certification term was extended to ten years. Additionally, applicants are now able to secure an extra three to five years on their certification term based on a demonstration of extraordinary achievement in each criterion.  At the same time, the program has been enhanced to ensure that facility changes made during the course of a certificate term are evaluated for their potential impacts.

Outside of the Ccrtification programme, LIHI has been involved in shaping how hydropower is included in energy policy and markets around the country. In states like Massachusetts and Oregon, LIHI is utilised in their renewable portfolio standards, with certification acting as a proxy for exhibiting the environmental standards required for hydropower to qualify as a renewable energy source.

The Centre for Resource Solutions established the Green-e Framework for Renewable Energy Certification as the first voluntary renewable energy credit (REC) market. LIHI was fortunate to provide the catalyst for hydropower’s inclusion in this programme and LIHI Certification is still utilised as a qualifier for the program today. There has also been a rise in Community Choice Aggregators and corporate procurement showing interest in hydropower. In these purchase agreements, LIHI Certification is able provide consumer confidence that the energy generated is done so in an environmentally and socially sound manner.

LIHI currently only certifies hydropower projects in the US and does not certify projects that involve construction of new dams or water diversions, pumped storage projects, or marine hydrokinetic projects.  The International Hydropower Association recently released the Hydropower Sustainability Standard which is more appropriate for new hydropower development. Since only a mere three percent of dams in the US have hydropower, LIHI is focused on the ongoing impacts from operating hydro projects and the impacts of new generation on existing dams.  While the approach differs (LIHI is outcome based while the HSS is process based), the purpose and goals of each programme are similar, and there is significant overlap in each programme’s certification criteria.

At the national scale, the increased need for climate change mitigation measures has spurred renewed interest in incentivising environmental improvement in the renewable energy realm. LIHI has taken a leading role in the Uncommon Dialogue process led by Stanford University and the Energy Futures Initiative, working with hydropower leaders, environmental stewards, and national stakeholders to find common ground on key issues the US hydropower fleet faces.

The US Department of Energy Waterpower Technologies Office has also called upon LIHI’s expertise on numerous occasions, requesting input on the Hydropower Vision Report, development of relicensing tools, and the development of new standard modular hydropower. The LIHI criteria have been cited as benchmarks for developers to help design projects that meet the programme’s standards.

Though a small institution, LIHI dedicates significant time and resources to participate in local, regional, and national discussions, helping to develop the discourse around hydropower’s role in a carbon free future and the pedagogy around its impacts and benefits.

Over the past twenty years, the LIHI certification programme has consistently met the LIHI mission but, as with any program, LIHI strives to improve and to make a bigger impact.

Through programme enhancements, including continual reassessment of our criteria and standards, and expansion of our outreach efforts, LIHI hopes to increase the amount and positive impact of hydropower improvements, increase the number of facilities in the program, and provide high quality information to stakeholders. This year, the governing board and staff have been taking a deeper look at LIHI’s role internationally, climate adaptation efforts of hydropower owners, and ways to encourage comprehensive stakeholder involvement. LIHI constantly strives to find more opportunities to engage with stakeholders across the country and ensure that information on LIHI certified hydropower is included in discussions of proposed national renewable or clean energy policies.

The use of LIHI certification, either directly or indirectly, in defining eligible hydropower in renewable policy programs demonstrates its influence in shaping public policy. Local ecosystems are essential for a healthy climate, and hydropower owners that are actively working to limit their impacts and safeguard the environment should receive recognition. Through its website, application process, and outreach activities, LIHI has opened the door to digestible, independent information on at least a portion of hydropower in the US.

Hydropower in the U.S. continues to be a controversial renewable energy source. Though it utilises a renewable resource, some argue that it impacts surrounding ecosystems too dramatically to be relied on as the US takes steps to decarbonise its energy grid. However, it is easy to overlook its many benefits in a decarbonized energy future. As intermittent energy sources such as wind and solar power continue to come online, the need for baseload renewable power sources becomes ever more important to a clean energy future. Low Impact Hydropower can fill that role, with some facilities providing additional services like black start capability, storage capability, flood control, and recreation.

LIHI certification provides an independent, science-based analysis of a hydropower project’s impacts on its ecosystem, assuring power purchasers, policymakers, and stakeholders around the country that the hydropower they rely on has integrated their operations with the communities that they serve.

It is not simply a mark of assurance; LIHI certification incentivises the growth of a climate solution that integrates consideration of socio-environmental factors. Hydropower can play a vital role in a decarbonized future if it integrates sustainable management of the resources it relies on. 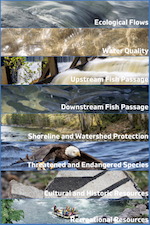 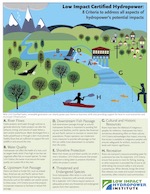 An illustration of the LIHI Criteria including general descriptions.

The Freedom Falls Project on Sandy Stream in Freedom, Maine – LIHI Certificate No. 178.

The Cavendish Project on the Black River in Cavendish, Vermont – LIHI Certificate No. 97.

A map detailing the locations of LIHI Certified facilities across the United States.
Post to: