On the power train

Marine Current Turbines, a Siemens business, is moving into the next generation of powertrains that are the core element of the company’s SeaGen tidal turbines. IWP&DC talked to Siemens to learn more about the new powertrain. Developed using experience from the powertrains on SeaGen in Strangford Lough - the world's first and largest commercial tidal turbine - the new powertrain from Siemens business Marine Current Turbines has an increased power rating and, despite its larger size, better economics.

The powertrain consists of a rotating hub, a gearbox which reacts the turbine loads, and a generator supplying power to the grid through a convertor. The new machine has been in development for two years and IWP&DC talked to Dr Achim Woerner, the head of Hydro & Ocean business at Siemens, to discover how and why this new development came about, and what it will offer the industry.

Dr Woerner: Over the last 10 years we have gained a lot of experience and learnt a huge amount of lessons from long-term testing in the sea. Today we are simulating a full lifetime of operational load on our new 1MW tidal Energy Conversion Chain (ECC). An accelerated life test lasting 2000 operating hours which simulates 20 years of fatigue in the real life application is unique to Siemens! This test is currently taking place at NAREC (National Renewable Energy Centre) which is an R&D centre in the UK. The aim of the centre is to catalyse the development and deployment of offshore wind, wave and tidal energy generation technologies.

"There are several facilities across Europe that we could have used but National Renewable Energy Centre in the UK seemed to be ideally tailored to what we needed."

There are several other facilities across Europe that we could have used but NAREC seemed to be ideally tailored to what we needed. It facilitates testing for accelerated life and extreme event testing of prototype wind and tidal energy turbines. Its location was advantageous, based fairly locally to MCT which allowed a straight forward road transport operation to transfer the machinery from our facility in St Phillips, Bristol. The facility was also available and capable of delivering what we needed.

We can remotely monitor the system but also have a team of engineers at location to closely monitor the testing. We also have support from our suppliers Flender and Loher, the gearbox and frequency converter manufacturers respectively, both Siemens companies; they assist us in analysing files and telemetry data to assess whether the systems are performing as required.

We can remotely diagnose and reset the system from our office in Bristol with the support of the control engineers as and when required.

In future we will also perform comprehensive tests on our blades including ultimate load (destructive testing), fatigue testing (accelerated life) and initial deployment on our prototype SeaGen in Strangford Lough

Why was the new development needed? What are the essential differences in the new powertrain?

On the way to driving tidal current technology to commercialization, we started with a first project called Seaflow in 2003 with a capacity of 300kW. In 2008 we installed SeaGen in Strangford Lough in Northern Ireland, the first commercial-scale tidal current powerplant. It consists of two axial-flow rotors of 16m diameter. They have a combined capacity of 1.2MW. Until today SeaGen has fed more than 9GWh of electricity into the grid and supplies eco-friendly electricity to approximately 1500 homes. The new powertrain has been developed using all this experience and has an increased power rating, from 600kW to 1MW per powertrain. As it is a larger machine, the economics work out better.

The essential differences of the new powertrain are:

What are the benefits?

The technology taps into a renewable energy source, which is absolutely predictable. Siemens is a pioneer in tidal current technology and with our experience we are able to deliver a proven and commercially viable technology. Incidentally we have undertaken an extensive environmental monitoring programme around our SeaGen project for a period of six years. So when the ECC and its comprehensive test schedule is completed, the product is ready to be deployed!

Any plans to increase size again?

If we think about increasing size we should talk about an optimized configuration of deploying arrays. Therefore we are working on optimized structural designs. Globally we have to answer to different site specifications and site conditions (wave, water depths, bathymetry) which lead to different technical solutions regarding support structure.

There are different technical solutions like surface piercing, submerged or floating devices. We are developing an ECC solution that is appropriate for all of these different structural approaches. This will be an important key factor for a standardized solution that will ultimately lead to lower LCOE. A further increase of the rated power beyond 1MW is certainly on the long-term roadmap to further lower LCOE.

Have any new sites been identified which could use the new machine?

The new ECC will be deployed in several projects located in UK, France and Canada. In the UK we are working on a project at the Skerries in Anglesey. The Welsh Government has granted a Marine License for this project. Siemens/MCT is developing a significant project pipeline in the UK. In Canada and France we will develop tidal current technology with partners. In France we are partnering with UNITe for a site in Raz Blanchard and in Canada we are working on our first floating solution in the Bay of Fundy/ Nova Scotia. 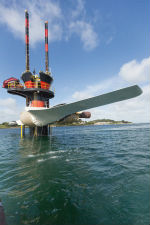 The SeaGen in Portaferry, Northern Ireland

The SeaGen in Portaferry, Northern Ireland has a rotor diameter of 16 meters
Post to: