Pumped storage projects are making the news internationally, with new projects planned or in development in a range of countries. Recent projects have been announced across Europe, including Scotland and Austria, while plans are afoot for new projects in North America and Asia. There are also plans to refurbish and relicence existing pumped storage projects, as detailed in the following sections.

A first for Alberta

Canadian firm Turning Point Generation (TPG) has announced it is moving ahead with plans to build its first pumped storage project in Alberta.

With a design capacity between 80-150MW, the project is expected to be connected to the Alberta transmission system and would provide sufficient storage to generate about 8hrs at full capacity. It is the first of multiple sites identified for development by TPG.

“We are excited to be moving ahead on this project, the first in our portfolio of PHS projects in Alberta," comments Peter Bubik at TPG. "After an extensive strategic process to find and select favourable sites for pumped storage we are happy to be moving to the next phase of development for this site. This project is our most advanced, has exceptional inherent site characteristics and enjoys favourable reception from key stakeholders, including the First Nations involved. We believe the Alberta power market provides an economical basis for pumped storage at this time and the market indications are showing increasingly favorable economics for pumped storage in the future."

TPG said the strategic process to find and select pumped storage sites in Alberta was comprehensive and conclusive, and says it has assembled a portfolio of feasible sites.

Also in North America, the New York Power Authority (NYPA) has taken the first official step to obtain a new operating license for its Blenheim-Gilboa pumped storage project by filing the required preliminary documents with the US Federal Energy Regulatory Commission (FERC).

NYPA said in a statement that as relicensing is a multiyear process, by initiating the process now, it will be positioned to obtain a new license before its current one expires in April 2019.

NYPA filed a Notice of Intent (NOI) to formally notify FERC of its intention to relicense the project. In addition, it filed a Pre-Application Document (PAD), a comprehensive report describing the relicensing process and providing engineering, operational, economic and environmental information about the project.

“The Blenheim-Gilboa project plays a valuable role in the security and reliability of New York State's bulk electric power system - by providing electricity during periods of high demand - while also being linked to important recreational, tourism, economic and environmental benefits for the Schoharie Valley," said Lynn H. Hait, regional manager for Central New York, NYPA. "A new license will allow the Power Authority - a public entity operated without taxpayer dollars - to continue providing important energy reliability and community benefits to local residents and the people of New York State."

In May 1969, NYPA received a 50-year license from the Federal Power Commission, the predecessor of FERC, to construct and operate Blenheim-Gilboa along the Schoharie Creek, a tributary of the Mohawk River in the northern Catskills. The power plant, began supplying electricity to the state's power grid in 1973. NYPA expects to submit its application for a new license in April 2017.

Blenheim-Gilboa's principal features include the power plant; the upper and lower reservoirs; and all surrounding grounds and facilities within the project boundary, much of which support regional tourism and recreation.

Recently, it was announced that the Philippine Department of Energy approved a proposal for a 200MW pumped storage project in Aklan from Strategic Power, a wholly-owned subsidiary of the SMC Global Power Corp. The company also has pending applications for hydro service contracts to build the 20MW West Upper San Roque and the 10MW East Upper San Roque pumped storage projects. The 200MW scheme is currently in the pre-development phase, but would make a substantial contribution to meeting the Philippines energy needs if it does go ahead.

"The 300MW Gilboa pumped storage project, the first of its kind in Israel....will be commissioned in 2018"

Elsewhere in Asia, details were recently announced on the 300MW Gilboa pumped storage project, the first of its kind in Israel. Located 60km east of Haifa, the scheme will be commissioned in 2018 and will increase the country's installed power generation capacity by 2.5%.

In January 2014 Alstom signed two contracts totalling around €120M with PSP Investment Ltd for the supply of two 150MW pump-turbines, with the associated balance of plant equipment and Alstom's Distributed Control System, for the project. The company also signed an 18-year operation and maintenance agreement, covering day-to-day operation and maintenance of the power plant. The Gilboa project represents Alstom's first entry into the Israeli hydro market

In March 2014, Alstom was also awarded a contract by Vorarlberger Illwerke AG for the supply of two 180MW generators and exciters for the Obervermuntwerk II pumped storage power station in Austria.

Once in operation in 2018, the Obervermuntwerk II scheme will be Illwerke's second largest power station. It is designed as a parallel to the existing Obervermuntwerk and will be constructed at an altitude of 1700masl as an underground station between the two reservoirs Silvretta and Vermunt in Montafon.

Voith will supply, assemble and commission two 170MW storage pumps and hydraulic torque converter for Obervermuntwerk II, while for new Rellswerk project, it will supply a 13MW, 3-stage pump turbine, complete with bearing oil supply system, as well as assembly and commissioning services. Rellswerk is to be incorporated into the existing group of power plants, and will produce around 18GWh of additional primary energy a year.

Voith has been involved in a number of other pumped storage power plants in Austria, including Kops, Limberg and Rodund.

Across the border in Germany, a field trial, which is the first of its kind, is now underway at the country's second largest power plant to find the most effective combination of materials to use to increase its capacity and upgrade it, reports hydraulic asphalt engineering experts at WALO.

Vattenfall Generation, owner of Markersbach pumped storage power plant in Markersbach, Germany, is planning to raise the height and regenerate the upper and lower reservoirs of the plant in 2015-16. This major project to regenerate Markersbach, one of the largest hydro power plants in Europe, may require different technical solutions to ensure optimum and long lasting performance. Four field trials have been set up, covering an area of 3600m2, to test different systems for lining the steep sides of the upper reservoir and re-shaping the dam crest. The results are being monitored over a four year period. WALO has provided technical expertise in the placing of drainage asphalt and the Dense Asphaltic Concrete (DAC) used in each of the four field trials. 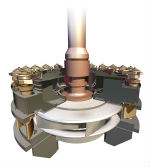 3D rendering of a pump turbine (courtesy Alstom)
Post to: