The rapid uptake of wind power projects in Germany is creating a renaissance for pumped storage schemes across the country. Recent studies suggest that there may be more than 300GW of potentially feasible sites in the country, with an estimated 2-3TWh of storage capacity. Michael Heiland and Robert Achatz from Hydroprojekt give more details.

Hydropower and dam construction has always played a major role in Hydroprojekt since its establishment in 1978 when Germany was still under a socialist German Republic. The company's predecessors, engineers of the Weimar-based state owned company, were responsible for major dam projects such as the 106m high Rappbode dam in the Harz mountains (still the highest concrete gravity dam in Germany), plus many other dams mainly for water supply and flood control. They were also involved in the design of the 1050MW pumped storage project Markersbach which started operation in 1979.
Today Hydroprojekt is one of Germany's leading consulting engineering companies in the fields of water, hydropower, environmental engineering and infrastructure. Taken over by Lahmeyer International in 1990, after the reunification of Germany, Hydroprojekt, in cooperation with Lahmeyer, was engaged in the design and supervision of the 1060MW Goldisthal pumped storage project in Thuringia.
Owned by Germany's fourth largest utility, Vattenfall Europe Generation AG, it started operation in 2003. The power plant is equipped with four 265MW pump turbines. Two of these are speed-controlled by asynchronous motor generators which allow more flexibility in the pumping mode and higher efficiency in the turbine mode. With its 12Mm³ upper reservoir with an average head of 350m, Goldisthal is able to store 8.5GWh in an eight-hour cycle.
In 2011, the Fukushima nuclear power plant disaster caused the German government to define a new energy policy, boosting the participation of renewable energy sources for electricity generating to 35% by 2020 and 80% by 2050, respectively, and to shut down all nuclear power plants by 2022.
The ambitious plan is based on the rapid development of mainly off-shore wind power and photovoltaic power plants. At the current time about 30GW of wind and 30GW of photovoltaic have already been installed. The largest growth was in the photovoltaics, almost 50% in 2011/2012, due to attractive promotion programmes and the falling cost of PV panels. Together with generation by biomass and hydropower, the contribution of renewable energy to electricity generation has already passed 20%.
Wind and solar energy sources are volatile and, in order to cope with the load curve, they require large energy storage capacity. As pumped storage power plants are the only solution available on a large scale, the technology is experiencing a renaissance in the German power market. With more than 80 years of experience and continuous development the reliability of hydropower, with pumped storage's efficiency factor up to 80% in the pump and generation cycle, are proving to be convincing arguments.
Nowadays pumped storage power plants play a major role in the provision of regulating services for stabilisation of the power grid. Within seconds pumped storage plants are able to increase electricity generation when demand requires or to take power out of the grid, to avoid a frequency breakdown.

During the past three years, Hydroprojekt has increased its engagement in pumped storage power projects. A large number of studies have been prepared for public authorities, power utilities, urban power suppliers and private investors to identify possible sites for new pumped storage schemes and to evaluate their storage potential and capacities. Comprehensive studies were carried out to investigate the potential on pumped storage of the federal states of Thuringia, Nordrhein-Westfalen, Baden-Württemberg and, recently, for the free-state of Bavaria. This involved new sites for pumped storage as well as the incorporation of existing reservoirs.
Based on digital terrain models (usually DTM 50), relief analyses of the existing topography were carried out to identify possible sites for upper and lower storages. In order not to overload the model with too many possibilities, and considering that minimum requirements must be given in order to receive technically and economically reasonable sites, a minimum elevation difference of 200m and a maximum horizontal distance of 5km between upper and lower storage were chosen. Using GIS techniques the studied area was overlaid by digital maps showing settlements, main traffic infrastructure, environmental protection areas, natural reserves (Natura 2000 areas and water protection zones). Any affected sites were screened out.
In a second step, upper and lower reservoirs of the remaining sites were related to each other and the best options further studied using economical cost parameters, related to the main parameters of the sites such as active volume, discharge, head, horizontal distance between the reservoirs, capacity, distance to the grid etc. Finally, some selected sites, identified and evaluated by the GIS-based study, were compared with especially prepared conceptual designs in order to validate the results.
The results are very promising. Only in the state of Baden-Württemberg, mainly in the Black Forest Mountains, over 200 sites were identified with total capacity of 116GW and storage of 928GWh, almost 20 times the actual pumped storage capacity of Germany. Results of the Bavarian study are still pending. Based on results of the studies carried out for Thuringia and other studies, the total potential of feasible pumped storage sites in Germany may be estimated at more than 300GW with 2-3TWh of storage capacity.
So, the problem of rapidly changing power production by wind and solar energy seems to be manageable. But what about the wind gaps in various days, which can happen especially during the winter season when photovoltaic production is also low? Recent studies indicate that storage capacities up to 30TWh would be required to overcome such power shortages, which cannot be compensated by pumped storage schemes.
Due to their large reservoir capacity, Norway's extensive hydropower installations may provide certain options for 'indirect energy storage', ie to export electricity to Norway during high production in Germany. This may be directly absorbed by the demand in Norway while some hydropower plants are taken out of operation, thus reducing water consumption of existing storages. Taken as an assumption that there is reserve hydropower capacity in Norway, the energy can then be transferred back to Germany when power shortages are likely to occur by increasing power generation in Norway. However, such an option requires large scale power interconnectors between the two countries including the improvement of the transition grid in the hinterland.

The construction of more pumped storage power plants is required to cope with the daily compensation of increasing volatile power generation by wind and photovoltaic power plants. However Germany's power utilities and potential private investors are reluctant to commit as unfavourable framework conditions such as low prices spread between power purchase for pumping and power generation sales do not allow economically feasible operation of the plant. Income prognosis becomes even more uncertain when, due to more volatile energy production, energy trading prices at the spot market are more difficult to predict.
Nevertheless, several projects are currently being developed in Germany by power utilities or private owners. Under contract with the German power utility EnBW, Hydroprojekt as leader of a consortium with Lahmeyer International and Geoconsult ZT of Austria, is currently preparing the detailed design and application documentation for two new pumped storage power plants at Forbach in the northern Black Forest Mountains. The project will utilise the existing 65m high Schwarzenbach dam, Germany's first concrete gravity dam, completed in 1926 with a storage volume of 14Mm³.
The reservoir will serve as the lower reservoir for a new 200MW pumped storage plant with an upper reservoir of 2Mm³ formed by a ring embankment dam some 320m above the Schwarzenbach reservoir level. At the same time the Schwarzenbach dam constitutes the upper storage for another pumped storage plant of 70MW to be built in the 360m lower Murg valley.
This pumped storage plant will replace the old 43MW Schwarzenbach hydropower plant, which will then be taken out of operation. The new shaft-type power plant shall also host two new turbines of a total of 18MW related to the existing Murg hydropower plant, which abstracts water from the Murg river some 5km upstream. An existing reservoir at Forbach will be used for lower storage in combination with a newly built underground storage, thus increasing it to a total of 0.6Mm³.
Hydroprojekt has also carried out the detailed design and will provide site supervision for increasing storage volume of the upper and lower reservoirs of the existing 1050MW Markersbach pumped storage plant by 735,000m³. This will increase the total storage capacity by12% to 4.9GWh. The project contracted by Vattenfall Europe Generation will also include rehabilitation of the complete asphalt surface sealing of the upper reservoir.
In co-operation with Lahmeyer International, engineers from Hydroprojekt have also been also involved in the:
- Design of the 1400MW Atdorf pumped storage project of Schluchseewerke in southern Germany.
- Design and site supervision of Waldeck I pumped storage power plant of E-On AG near the Eder dam.
- Extension of the 1100MW Vianden pumped storage power plant of Société Electrique de l'Our in Luxembourg with the installation of an eleventh pump turbine (200MW).
The current developments in the energy sector will necessitate the extension of pumped storage capacities in Germany. The engineers of Hydroprojekt and its parent company Lahmeyer International have a long tradition in the design and supervision of pumped storage plants and are looking forward to further interesting projects in this field. 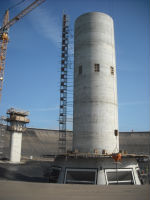 The intake tower at the Vianden pumped storage plant in Luxembourg

Reinforcement of second stage concrete around the turbine spiral at Vianden pumped storage project
Post to: