RCC Dams: Simplicity is the key to success

The British Dam Society’s recent meeting on RCC dams emphasised the quality, speed and economic construction which can be achieved with these structures. RCC dams were the focal point for discussions at a recent meeting hosted by the British Dam Society in London. Malcolm Dunstan took to the floor to give an interesting presentation recounting his experience of the practicalities and economics involved with the construction of this type of dam.

Dunstan has been involved with more than 135 RCC dams in 53 different countries over the past 35 years. He is currently working on 17 dams worldwide and spoke about the geographical distribution of RCC structures. He said that worldwide interest can be reflected through the demand for ICOLD's Bulletin 126 which looks at state of the art RCC practice and case studies. Originally published in 2003, with a new draft currently being worked on, this bulletin has sold more copies than any other. It has also been translated into more languages including Spanish, Chinese, Portuguese, Vietnamese and now Russian.

"There are 550 RCC dams in the world and approximately 45% are located in Asia."

There are 550 RCC dams in the world and the majority (approximately 45%) are located in Asia. "To be honest," Dunstan says, "this is where all the technological advances are being undertaken in RCC at the present moment." He also spoke about India which, with the Middle East, accounted for 5.5% of RCC dams at the end of 2011. There are many up and coming large dams in India and Dunstan believes that this country has also "caught the RCC bug".

After briefly covering the design philosophies of RCC and the average proportions of mixtures for each one, Dunstan explained that there can be a huge range of efficiency in the placement of RCC.

“One of the things we find with RCC," he says, "is that if you get everything right they go extremely fast and are extremely economic. If you get things wrong," he warns, "they can spiral down into a fair disaster."

Landmark RCC dam projects from around the world were featured in Dunstan's presentation. He spoke in detail about the following list of what he called "rather special dams".

Upper Stillwater dam in the US was the first 1Mm3 RCC dam to be constructed back in the early 1980s. For 20 years or so it was the fastest RCC dam to be built and had the highest average rate of placement.

As the dam is located 2500m high up in the Rocky Mountains vast temperature variations meant that RCC placement had to take place over three seasons from 1985-7. In addition, although workers could generally work on site for between five and five and a half months each season, a late spring and early autumn in 1986 reduced this to only four and a half months. However during the 1986 season, 539,400m3 was placed successfully in 128 days.

"Shapai dam in China is a 100% RCC thin arch dam which, according to Dunstan, is probably one of the most interesting"

Shapai dam in China is a 100% RCC thin arch dam which, according to Dunstan, is probably one of the most interesting. At 132m high, it is 250m long with an RCC volume of 365,000m3. The double curvature arch structure is a very thin dam with a base of 28m. Placement of RCC took just over 26 months.

Dunstan thinks that Shapai is particularly interesting as during the Sichuan earthquake in 2008 it was the nearest dam to the epicentre. Acceleration on the dam crest was reported to be 1G during the earthquake which is way over the design factor for the dam. However there wasn't a single crack on the dam and it was still fully operational.

Olivenhain dam in the US has the accolade of being the first RCC dam to achieve an average rate of placement of 150,000m3 per month. Storing an emergency water supply for San Diego, the 97m high and 788m long dam was built extremely rapidly. With an RCC volume of 1,070,000m3 it took 8.8months to place.

The 135m high Yeywa dam in Myanmar is the first large RCC dam to use natural pozzolan as opposed to fly ash. Project feasibility studies had stipulated that fly ash would originally be imported from Thailand but upon reflection this was deemed impractical. Instead the dam featured an interesting use of natural pozzolan (volcanic ash) from Mount Popa in Myanmar. It was discovered that there was an almost infinite quantity of natural pozzolan here which, Dunstan says, turned out to probably be one of the best in the world.

The mixture portions of the RCC was 75kg of cement and 145kg of natural pozzolan. RCC placement in the main body of the dam started in February 2006. Only 13 people were required to place about 8000m3 of concrete a day.

“It was a very simple process," Dunstan says, "but only if a lot of thought is put into it."

RCC placement finished 5.5 months ahead of schedule and the spillway was in operation in September 2010. RCC placement took 34.3 months for a volume of 2,473,000m3.

"Son La dam in Vietnam will be remembered as the first large project to ever be finished on time and on budget in Vietnam."

Son La dam in Vietnam will be remembered as the first large project to ever be finished on time and on budget in Vietnam. Son La is 139m high and 900m long. With a volume of 2,677,000m3 RCC, placement took 31.5 months and it was the first RCC dam to use treated fly ash in the cementitious content.

Fly ash from Vietnamese power stations has been dumped in ponds and been lying there for 20 years or more. It previously could not be used but Dunstan says that the development of a new treatment technology means it can now be used in concrete.

Main excavation took place at Son La in September 2006 and everything had to be devised around the floods. In July 2007 a 12,000m3/sec flood passed through the diversion dam. The concrete plant at Son La was also in a location liable to experience landslides. The project had to have emergency backup plans where 20,000 tonnes of cementitious materials were stored in bags in a warehouse, with another 20,000 tonnes stored in a nearby village. In the event that a big landslide occurred and the concrete plant was cut off, RCC placement could still continue.

The 2400MW hydropower dam project swung into operation in 2012, producing the equivalent of $1M of power a day. The Prime Minister of Vietnam was so impressed that he decreed the next dam to be built upstream at Lai Chau was to have the exact same people working on it. There was to be no bidding. Everything was just moved lock, stock and barrel to this new dam site.

“I believe that this a world record for the amount of concrete placed during the first month at any dam in the world," Dunstan said. As the workforce was brought straight there from the Son La project there was no learning curve and construction could start rapidly. By 27 December 2013, 1Mm3 of RCC had been placed - which included five months of the rainy season where productivity had decreased by about 50%. Dunstan says that there is currently an average of 150,000-180,000m3 being placed a month.

But just how high can RCC dams go? There are 38 dams in the world at the moment which are 200m or higher. Over the next few years Dunstan says that there are plans to build RCC dams higher than this. Longtan in China is the largest RCC dam to be completed so far and, some might say at 218m high with a dam volume of 7.5Mm3, it is one of the largest dams of any form in the world.

Other RCC projects measuring over 200m high which are under construction or planned to start soon include Diamer-Bhasha in Pakistan, Gibe III in Ethiopia, Dasu on the River Indus; Ta Sung in Myanmar and Sisri in India.

In conclusion to his presentation Dunstan said that each dam is unique and each has particular features. There are now enough completed RCC dams to be able to define the factors that impact on the rate of RCC placement and to be able to quantify some of these. Indeed the difference between the most efficiently placed RCC dams and the least efficient can be a factor of three and in extreme cases as much as five.

In order to take full advantage of this method of construction, Dunstan stresses that the design and construction methodology has to be considered as a whole and should be kept as simple as possible.

It is without a doubt that the main advantage of RCC is its rapid construction. Not only will this allow the owner an earlier return on their investment but the faster that RCC is placed, the better the quality will be, and the more economical the structure.

To reinforce this point Dunstan spoke about the clients at the Ghatghar RCC dam project in India. They said that the selection of RCC dam construction, in lieu of conventional concrete or masonry dams, meant that the Ghatghar RCC dam benefitted from being commissioned three years early, and therefore benefitted from the generation of 1350M units of power which was worth 5200M Indian rupees. This was equal to half of the cost of the whole project and clearly illustrates the successful role RCC dams can play in hydroelectric projects.

This article was compiled from the meeting entitled The Practicalities and Economics of RCC by Malcolm Dunstan, held at the British Dams Society in London on 20 January 2014.

For information about future BDS events see www.britishdams.org More information on Malcolm Dunstan & Associates can be found at www.rccdams.org

Yeywa RCC dam under construction in Myanmar, in January 2008 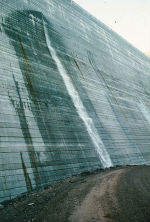