Responsible hydropower is part of the solution

Hydropower is now firmly back on the investment agenda for the World Bank and has a key role to play in tackling development challenges worldwide. Suzanne Pritchard spoke with the Bank’s Chief Hydropower Specialist, Jean-Michel Devernay, to find out more. Worldwide, 1.2 billion people lack access to electricity, 590 million of whom live in sub-Saharan Africa. In many countries, access is below 10%. But is responsible development of hydropower part of the solution?

"Sustainable hydropower is a critical part of a pathway to prosperity in Africa, as the largest source of renewable energy deployable at scale," says Jean-Michel Devernay, Chief Hydropower Specialist at the World Bank.

Devernay joined the World Bank Group in July 2012, and is currently the highest technical authority in the Bank regarding global issues related to hydropower development.

"Assessing them with care is of the utmost importance to us and we believe that we can help developing countries manage the risks while generating long-term development benefits to meet development aspirations of millions of poor people in the developing world."

IWP&DC: What is the World Bank's current position on financing hydropower projects?

Jean-Michel Devernay: The World Bank Group (WBG) is firmly committed to the responsible development of hydropower.

This was approved unanimously by our Board as part of the World Bank Group's Energy Directions paper in July 2013. To provide concessional financing to our client countries for development of sustainable hydropower is one example of this commitment.

So would you say that hydropower is now firmly back on the investment programme for the World Bank?

J-M D: Yes. The President of the WBG, Jim Yong Kim, announced last year two corporate goals: to end poverty by 2030 and boost shared prosperity for the poorest 40% in a sustainable manner. We do not believe those goals can be achieved sustainably without hydropower. Uganda seven years ago was experiencing regular blackouts and had to use diesel-fired thermal power to backstop the energy gap. Today, with the Bujagali hydropower project up and running since 2012, this has drastically reduced blackouts and the need for costlier diesel-fired power. That creates a much better opportunity for homes, schools, clinics and businesses to thrive.

"Since the 2003 Water Resources Strategy...the World Bank has approved about 100 projects related to hydropower"

Since the 2003 Water Resources Strategy, which states that the Bank would re-engage in hydraulic infrastructure, the World Bank (includes IBRD/IDA, GEF and Recipient Executed Activities) has approved about 100 projects related to hydropower (during fiscal years 2003-13), for a total of US$5.7B in financing. It has 30 projects in its pipeline, roughly half of which are in Africa.

The IFC has approved 42 hydro projects totalling US$1.3B over the last decade.

Are you interested in financing in any region of the world, any type of project, even large dams? Is this as long as it is represents 'responsible development'?

J-M D:Our support is not linked to any specific region or any specific type or size of project. When asked by developing countries, the WBG provides support to hydro projects only when they have a demonstrated economic viability, and if they comply with the institution's internationally-recognised social and environmental safeguards and performance standards. Each project should be assessed on its own merits and developed if it can help alleviate poverty and boost shared prosperity.

There are viable run-of-river (RoR), storage and smaller projects possible. Our portfolio for recent years shows that we support hydropower projects of all scales, with projects above 100MW representing less than one-third of the total. A more detailed analysis shows more hydropower rehabilitation projects than greenfield projects, and a balanced mix of storage, RoR, and pumped-storage projects.

In fact, 45% of our hydropower interventions over the last 10 years were for off-grid mini and small hydropower. During this period, the WBG also facilitated 27 carbon market transactions around hydropower to offset emissions from other technologies. Of these, approximately 60% were for RoR projects.

How much money the Bank has pledged for funding hydropower projects in the world's poorest countries?

J-M D:The WBG has not pledged any specific amount of our support to hydropower. The level of funding we will commit to hydropower will depend on the needs of developing countries, and the types of projects for which they request our assistance, and is therefore likely to vary from year to year.

The WBG has been funding about US$1B on average over the past four or five years, and for the coming years we project that this level will remain. This is only a couple of percent of the amount mobilised worldwide for hydropower development each year, but if you look at the poorest countries it becomes more significant.

Does the Bank believe that hydropower can play a key role in tackling climate change and is this directing its financial decisions?

J-M D:The WBG's goals are to eradicate poverty by 2030 and promote shared prosperity for the poorest 40% in a sustainable fashion. We believe that tackling climate change is a critical part of reaching these goals. Hydropower is affordable, very clean and has limited greenhouse gas emissions, especially compared with those from burning fossil fuels and many developing countries still have a large untapped hydropower potential.

Along with constrained access to electricity, by 2025, 2.4 billion people will be living in countries without enough water to meet all their needs. Water security is threatened by mismanagement of available water resources and increasing changes in weather patterns due to climate change.

Multipurpose hydropower dams can also support adaptation to increasingly extreme weather conditions by strengthening a country's ability to regulate and store water and so resist flood and drought shocks.

The WBG and its clients therefore recognise that responsible hydropower is part of the solution for tackling the development challenges outlined in our mission.

How is the bank committed to scaling up efforts to utilise the maximum strategic value of hydropower resources?

J-M D:Fifteen of the top 20 countries identified as having the biggest electricity access gap by the United Nation's Sustainable Energy for All initiative are countries with significant water resources that could be partially tapped for sustainable hydropower. These countries include some 750 million people who do not have access to electricity. At the same time hydropower with storage complements variable renewable energy sources such as wind and solar, and provides essential functions for power system control.

"Hydropower with storage can also give multi-purpose benefits for flood management, irrigation and water supply"

Hydropower with storage can also give multi-purpose benefits for flood management, irrigation and water supply. In our Country Partnership Frameworks that we develop together with our client countries, hydropower will likely thus get a more and more prominent role in the energy and water sectors.

Are there any key projects you've recently committed finance?

J-M D: Examples of hydropower projects that we have committed financing to in recent times, and which show the natural distribution of size and type of projects that we support, include the:

Based on an interview published in the April 2014 issue of International Water Power & Dam Construction magazine. 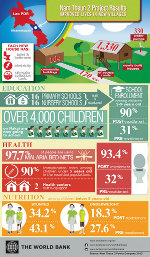 Impact of the Nam Theun 2 project in Lao PDR