In today's hydroelectric market, production planners and operations managers are asking the same questions: "How can we minimise outage times?" and "How much can we safely continue to generate while completing inspection and maintenance tasks?"

Demand and risk are two large issues that need to be closely considered each time a hydroelectric facility considers its underwater maintenance and inspection plans. Due to the design of some hydroelectric facilities and the ever increasing demand for the power they produce, the inspection of their underwater assets (including water conveyance tunnels) poses a large challenge.

A recent case involved Snowy Hydro of Australia and its inspection contractor, Hibbard Inshore of the US, managing demand requirements while also reducing risks to the tunnel systems. This was achieved by designing a method to inspect the tunnels while they were still full of water despite the longest tunnel being approximately 23.5km in length. In many cases such as this, hydroelectric tunnels run for long distances underground through hills or mountains, and dewatering of the tunnels poses large risks of collapse or unintended damages to the tunnels. By dewatering, concrete, shotcrete, and unstable sections of the rock can be stressed by the drying and re-watering process. Power demand and economics put large pressures on any maintenance activities to reduce outage times to the greatest extent possible. By avoiding dewatering and completing the inspections quickly while still collecting critical, high density tunnel condition data, Snowy Hydro and Hibbard Inshore have been able to improve both the demand and risk issues associated with long tunnel inspections.

This project began to take form with Hibbard Inshore launching new technology in late 2010 to perform quicker, more detailed long tunnel inspections with its Saab Sabertooth vehicle. That vehicle is unique in the marketplace in that it can be operated both as an Autonomous Underwater Vehicle (AUV) and a tethered Remotely Operated Vehicle (ROV). This vehicle can travel over 20km from a single access point allowing the owners of long tunnels to employ an inspection method that does not involve dewatering.

Before selecting the equipment for the Snowy Hydro inspections, Hibbard Inshore worked with the customer to determine expectations, learn the history of the tunnels, review tunnel drawings and site access considerations to determine the best equipment setup for the project. During this process, the following factors that influence the cost and difficulty of an ROV inspection were reviewed.

The length of the tunnels is important since inspection vehicles need to be powered and providing enough energy for propulsion and sensor operation adds complexity as the tunnel distance increases. Currently, there are very few solutions for tunnel stretches that are over 10km in length, and the Hibbard Inshore Saab Vehicle is the only tunnel inspection vehicle capable of runs exceeding 20km in length between access points.

The diameter of the tunnel is important as long range inspection vehicles are larger in size than their counterparts that are often used for inspections on the upstream face of dam, headgates and seals, short range penstocks, and outlets. If the tunnel diameter is too small, the vehicle may not fit well or may have more difficulty maneuvering.

The size, number and location of access points determine the maximum run lengths required, the type of vehicle that can fit into the tunnel, and the sensing systems that can be carried. They also have a direct effect on the length of time the vehicle will be in the tunnel for each outage. The number of bends determines friction on the vehicle tether and whether or not the vehicle can safely inspect the full distance.

Rate of flow influences the speed of the inspection, the ability of the vehicle to maneuver, and the density of the data collected during the inspection run. Runs to be completed in flowing conditions require additional planning and engineering to insure that each area of the tunnel can be navigated safely while collecting the data required.

The outage time available determines the number of vehicles required onsite, the crewing, the speed of the vehicle during the inspection, and the amount of dwell time allotted to further inspect any areas of interest.

In the case of Snowy Hydro, the scheme had long distance, large diameter tunnels with few access points, some of which were more complex with numerous bends. Snowy Hydro was able to shut down each tunnel to zero flow during each inspection, but because of demand, they wanted to reduce the amount of outage time while collecting very high density data to look at the tunnels in general, as well as areas of interest that were pre-determined by their team. Due to these conditions and the added complexity of access to the tunnels through various shafts and intake structures, many of these tunnels had never previously been inspected without dewatering. Snowy Hydro was searching for a solution to this issue to reduce stress on the tunnel structures and the cost of inspection.

In learning these requirements, Hibbard Inshore determined that the Sabertooth was definitely the best suited vehicle for this project. The vehicle can collect high density data at rates of speed that are far greater than other ROV inspection methods. Typically, long range ROVs that can travel over 2km in linear distance travel at approximately 0.3m/sec. However, the Hibbard Inshore Saab Sabertooth can travel and collect tunnel dimensional and imaging data at swimming speeds that are many times faster than that, drastically reducing outage time. The Sabertooth is uniquely configured with very powerful thrusters that give it propulsion and allow it to orient itself in any manner so that it can swim down shafts, through angles and around bends effectively.

Approximately 700mm wide by 520mm tall, the Saab Sabertooth solves the issues of tunnel or shaft size since it has the unique ability to enter a shaft nose down and navigate into the tunnel. The power of the thrusters and the length of the tether allow the vehicle to effectively inspect from fewer access points and around more bends, while the narrow and short form factor of the vehicle allow it to access through smaller cross-sections increasing the variety of possible locations to access each tunnel.

"In 2013, Snowy Hydro of Australia agreed that the Sabertooth was uniquely suited for its project"

In 2013, Snowy Hydro of Australia agreed that the Sabertooth was uniquely suited for its project and hired Hibbard Inshore to conduct internal inspections of several of the tunnels within the hydro scheme.

The Hibbard Inshore Saab Sabertooth system was equipped with a long distance fiber optic umbilical cable enabling full coverage of the tunnels as outage time permitted. The inspections have generated high density cross-sections as well as acoustic imagery. The vehicle carried multiple types of sonar in addition to its onboard cameras and lighting. The vehicle employed multibeam sonar units that update multiple times per second to image the top, bottom, and both walls of the tunnel concurrently while also taking dimensional measurements to look for:

The Saab vehicle collected this data and positioned it into a 3D map of each tunnel due to the presence of its integrated Inertial Navigation System (INS) which allows the vehicle to determine its GPS location despite not having access to overhead satellites. The system tracks both the vehicle's position and orientation throughout the tunnel. The 3D maps can help to determine tunnel alignment and can be used as a baseline for future inspections to show the position of features of interest such as sediment, pieces of rock, rock falls or open cracking in the tunnel.

From September 2013 through December 2013, Hibbard Inshore worked with the production schedulers at Snowy Hydro in order to develop and deliver an inspection schedule that was achievable and reduced the impact on production. During this time, Hibbard Inshore was able to conduct inspections in six different tunnels in the Snowy Scheme including the Eucumbene-Snowy, Snowy-Geehi, Jindabyne-Island Bend, Eucumbene-Tumut, Tooma-Tumut, and Guthega Tunnels.

The inspections to date have covered 57km of these tunnels and a round trip distance of 114km of inspection for two total passes on each segment. During the course of these inspections, the Snowy Hydro and Hibbard Inshore team had three separate inspection segments that each exceeded the previous record length inspection for a tethered vehicle of 10km. Those runs were a 10.1km run in the Snowy-Geehi Tunnel, an 11km run in the Tooma-Tumut Tunnel, and a 12km run in the Eucumbene-Tumut Tunnel.
Each of these inspections were round trip excursions meaning that for the 12km Eucumbene-Tumut run, the vehicle actually travelled a total of 24km. Because the vehicle is not dependent on its tether for power, it could also make at least a 24km run in a single direction from entry to exit.

"The use of the unmanned sub for tunnel inspections now means that it can be done more frequently, more safely and without the need to shut down power stations or drain the tunnel."

Chief Operating Officer of Snowy Hydro, Ken Lister, said: "The use of the unmanned sub for tunnel inspections now means that it can be done more frequently, more safely and without the need to shut down power stations or drain the tunnel. This multi-million dollar investment is a great outcome for the business, for the safety of our people and contractors and is part of our wider program of scheme upgrades and on-going maintenance."

In early 2014, due to the positive results of the initial inspection projects, the inspections will continue at the Snowy Scheme to cover additional areas of the tunnel system. This project has proven to be a resounding success that has pushed the boundaries of what was previously possible and has provided valuable data to Snowy Hydro on the condition of their assets.

Hibbard Inshore continues to provide inspections like these along with underwater construction and marine survey services worldwide delivering multiple underwater projects on five continents within the past several years. 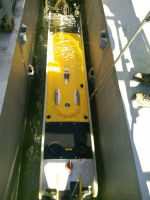 Sabertooth entering Snowy Hydro tunnel on an angle
Post to: