A European study is investigating the environmental impacts of noise, vibrations and electromagnetic emissions from marine renewables. Frank Thomsen from the DHI Group gives an insight into the new initiative. In Europe and beyond, there are ambitious plans to install marine renewable energy devices, or MREDs, ie wind, wave and tidal power plants. The construction and operation of MREDs will lead to, among other things, the emission of electromagnetic fields (EMF), subsea sound, and vibrations into the marine environment. Migratory fishes that respond to natural environmental cues, such as the Earth's geomagnetic field move through the same waters that the MRED occupy, thereby raising the question of whether there are any effects of MRED on migratory and other fish species. Yet, the exact EMF emissions of cables from MREDs are not known and studies on potential impacts are in its infancy (see Gill et al. 2012).

Underwater sound impacts from MREDs have become a particularly important environmental issue. This is because water is an excellent medium for sound transmission. Sound travels more than four times faster underwater than in the air and absorbs less compared with air. On the other hand, vision, touch, smell and taste are limited in range and/or the speed of signal transmission. As a consequence, many forms of marine life use sound as their primary mode of communication, to locate a mate, to search for prey, to avoid predators and hazards, and for short- and long-range navigation. Activities generating underwater sound can affect these functions and, since sound can be far ranging, the spatial scale of impacts can be quite large as well.

Effects of sound on marine life

"Some species such as the harbour porpoise are very sensitive to disturbance due to wind farm construction."

The effects of sound can vary depending on a number of internal and external factors and can broadly be divided into masking of biological important sounds (own sounds or signals from others), behavioural disturbance, hearing loss (temporary or permanent) and injury. In extreme cases, and at very high received sound pressure levels that are usually close to the source, very intense sounds might also lead to the death of marine life. Pile-driving sound during construction of offshore wind farm monopiles and other foundations (e.g. jacket or tripod) is of particular concern as it reaches comparably high sound pressure levels (source sound pressure level > 250 dB re 1 µPa; see information box) and could have significant effects on marine mammal and fish species common in northern European waters.

Research has shown that some species such as the harbour porpoise are very sensitive to disturbance due to wind farm construction. It is also possible that construction sound could lead to temporary or even permanent hearing loss in marine mammals and fish, depending on the overall sound energy (the 'acoustic dose') that is received over time, for example from the many strikes that are needed to drive a pile into the seabed. Yet, there are many open questions with regards to impacts of MRED related sound on marine life. These information gaps pose challenges to the implementation of MREDs (see Thomsen 2010).

In a project for the European Union (EU) Commission, Directorate-General for Research and Innovation, DHI is undertaking a study of the environmental impacts of noise, vibrations and electromagnetic emissions from MREDs (Marine Renewables, Vibrations, Electromagnetics and Noise - MaRVEN).

"DHI is undertaking a study of the environmental impacts of noise, vibrations and electromagnetic emissions from MREDs"

MaRVEN will critically review the available scientific evidence and significance of those impacts and then make recommendations on solutions to mitigate or cancel the identified negative impacts. The investigation comprises several tasks including:

The team members are from seven EU countries leading the implementation of renewable energy. Their expertise encompasses the key topics required for the study. It also brings together six members of the EU Task Study Group on Underwater Noise and other Forms of Energy (TSGN) that are directly involved in advice and recommendations with regards to the implementation of underwater noise regulation across the EU (Marine Strategy Framework Directive). There are also four members of Working Groups (including co-chairs) within the International Council for the Exploration of the Sea (ICES) associated with marine renewable energy.

MaRVEN will be an important stepping stone in the further implementation of marine renewable energy devices in the EU, in which the environmental impact assessment is getting more and more important in the consenting procedures.

A variety of countries have installed or begun to build offshore wind farms, and the first marine wave and tidal plants are being developed as well. Some reviews have covered impacts of noise (see, for example Thomsen et al. 2006) and electromagnetic emissions (see, for example Gill et al. 2012) and to a lesser extent vibrations on marine life but most of these works are generic and do not cover all topics or all regions of the EU.

Both the review and field work undertaken in MaRVEN will be used to propose technical mitigation measures to reduce or cancel the identified negative effects. Finally, the programme for further R&D with justified priorities should inform researchers working in the field, stakeholders (for example planners and NGO's) but also regulators in the EU and beyond.

The study commenced in December 2013 and will continue until June 2015.

DHI is a not-for-profit consulting and research organisation specifically focused on water environments. DHI's expertise spans a range of activities, from groundwater (freshwater in rivers and lakes), to industrial, drinking and storm water to coastal and oceanic marine waters. DHI has undertaken 50 years of dedicated research in more than 140 countries. It employs more than 1200 opeople in 30 countries who are involved in consulting, policy issues, R&D and software sales and support.www.dhigroup.com

Harbour porpoises (Phocoena phocoena) are the most common cetacean species in European waters. They are also known to be very sensitive to disturbance from underwater sound (Photo: iStockphoto). 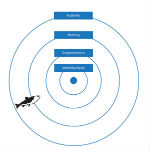 The theoretical zones of acoustic influence on marine life. Sound source is at the centre (not to scale). Data from Richardson et al. 1995 (taken from Gill et al. 2012).

Many countries have installed and are building offshore wind projects
Post to: