Australian renewable energy company Wave Swell Energy believes that wave power is poised for adoption and growth within the renewable energy mix over the next decade. Chief Operating Officer John Brown gives an insight into the role that his company is keen to play within future developments.

Wave Swell Energy (WSE) believes there are several reasons for the future uptake of wave energy. Firstly, it is a globally abundant resource and is particularly high quality along the western coastlines of Europe, North America, South America, Africa, and the southern coastlines of Australia. Importantly, these countries are among the leaders in its early adoption.

Furthermore, wave energy is less intermittent and variable than solar and wind and has low correlation with those weather based intermittent sources. Consequently, it provides much needed diversity in the mix of renewable sources because it can increase the volume of guaranteed electricity and reduce the volume of expensive storage solutions required for ‘firming’.

Whilst solar and wind technologies may in isolation have commercially viable LCOE and capex requirements, without the addition of wave in the renewables mix, the projected requirements for storage and the additional associated capital to achieve required levels of dispatchability will be significant, and ultimately passed on to consumers.

Independent research was undertaken by the Commonwealth Scientific and Industrial Research Organisation (CSIRO), Australia’s leading scientific research institution, in 2022 to establish if there may be a net economic advantage associated with combining wave energy with solar and wind generation and storage. Based on the assessment of a specific location, the CSIRO concluded that in order to guarantee 70% of the electricity generated from renewable sources to meet demand, a hybrid combination of generation from solar, wind and wave in the ratio of 1:1:1, coupled with battery storage would require less than half the capex compared with a hybrid of just solar and offshore wind, and one third of the capex for a hybrid of solar and onshore wind.

Current policy settings in the European Union also support the adoption and uptake of wave power. The European Commission Strategic Energy Technology (SET) Plan targets 1GW of ocean (wave and tidal) energy capacity deployed by 2030 and 100GW by 2050 (delivering 350TWh pa equivalent to 10% of EU power demand by 2050). The SET Plan envisages a €1b investment, comprising private investment (€335m), national and regional support (€400m) and the EC through Horizon Europe (€271m). The commitment of governments in the UK and in the US to wave energy is increasing as well.

Under the scenario of net zero emissions by 2050, the International Energy Agency also estimates that 27TWh will be generated from ocean (tidal and wave) energy by 2030, implying a 33% annual growth. In its latest GenCost 2022 report, the Australian CSIRO expects 10.9TWh and 1870TWh (2% of global electricity) generated from wave energy by 2030 and 2050, respectively, under the same scenario.

Over the past 20 years, a vibrant global wave energy industry has emerged across all technology development and deployment stages, including a robust supply chain.

WSE was formed in 2016 to develop a unidirectional oscillating water column (OWC) conversion technology. To confirm its commercial viability, the team designed a 1MW converter and tested its scaled-down model at the Australian Maritime College (AMC), a world leading centre of excellence for maritime and marine research, in Launceston, Tasmania.

A wave-to-wire conversion efficiency of 42% was validated by the AMC test results and resulted in the estimated LCOE of US 36 cents per kWh and the energy output of 2800MWh pa. WSE’s single-unit LCOE compared favourably with the industry benchmarks for wave converter arrays. The team anticipated that the LCOE will decrease to about US 9 cents at a cumulative installed capacity of about 100MW. With these cost projections in hand, WSE moved to the next stage of technology development.

To prove the technology and demonstrate its capabilities, the WSE team designed, built, installed, commissioned, and operated a grid-connected 200kW converter, UniWave200, at King Island, Tasmania. The unit was deployed in January 2021 and has been in this ocean location for over 18 months.

A scaled-down model of UniWave200 was tested successfully at the AMC. Then, after WSE received regulatory and environmental approvals, the construction team poured the simple concrete structure in stages before connecting the pontoons and door at the ship-lift site. Next, final assembly was completed with the addition of the turbine and upper structure in Bell Bay, Tasmania. Finally, the converter was towed across Bass Strait to its deployment location in Grassy Bay on King Island, where it was installed and commissioned. The converter exported electricity into the local grid under a power purchase agreement with Hydro Tasmania, a predominant energy generator in Australia, for over 12 months from June 2021.

Over the next year, the team used data captured from the onboard systems to refine and optimise performance. The refinements included upgrading the constant speed turbine control to variable control to uplift conversion efficiency to 48%, plus enabling autonomous converter control functionality to achieve converter availability of 80%. 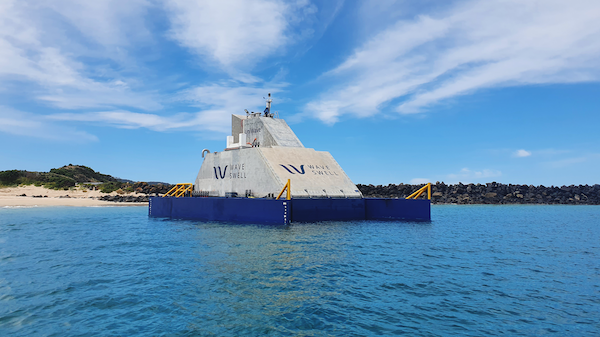 A simple and robust approach was taken to the design of UniWave200. It only has four moving parts (the air-driven turbine, shut off door, pressure release valves and venting seals) and none of these are in or under the water.  The only component of UniWave200 that is in the ocean is the concrete and steel substructure. Such a design has resulted in greater reliability and lower operation and maintenance requirements.

The AMC has assessed and validated the data and performance of the UniWave200 and the data has also been assessed and reviewed by the US Department of Energy’s Pacific North-Western National Laboratory. The consistency of the model and actual converter data gives confidence about the energy output prediction of 2800MWh based on the 1MW converter design.

The WSE technology has achieved Technology Readiness Level 9 and is at the top of the Renewable Energy Technology Readiness Level index adopted by the Australian Renewable Energy Agency. In 2017, WSE filed patent applications for its wave energy conversion technology in 12 jurisdictions. Patents have now been granted in Australia, Chile, China, Japan and South Korea. WSE expects the same will occur in Europe, Indonesia, South Africa, and the USA within the next 6-12 months and Canada, New Zealand and Singapore by the end of 2024.

WSE’s technology is now ready for commercial scale-up, which requires a transition through different capabilities and scale beyond the technology developer toolkit and reach. WSE now seeks partners ready to deploy its technology at scale and pace to help accelerate the global transition to reliable renewable energy.

WSE says its technology is complementary to the infrastructure required for climate change adaptation.

WSE commissioned PRDW, consulting port and coastal engineers, in South Africa to design and cost such dual-purpose seawalls and breakwaters. Coastal protection, including seawall construction, is an urgent priority requiring significant investment, given that about one billion people could be at risk from future coastal-specific climate hazards. In addition, the global port area (existing and new ports) is expected to increase two-fold to four-fold by 2050 relative to 2010 and will require new breakwaters. New port construction cost to 2050 is estimated to be US$215-750billion.

In the case of a seaport authority transitioning to green port operations, a current worldwide trend, the benefit of avoided investment duplication could be fully allocated to the converter. In this case, the starting LCOE would be US 25 cents per kWh for a 750kW converter incorporated into a typical seawall or breakwater, producing over 2000MWh pa energy with an average wave power density of 25 kW per metre. The lower LCOE is not only attributable to the avoided investment duplication, but also to the lower cost of construction due to building from land, and lower operation and maintenance costs due to ease and safety of access to converters from land.

An immediate, commercially viable application of the WSE technology is in isolated areas with microgrids currently powered by diesel, where wind farms and utility-scale onshore solar power are undesirable or not feasible, and coastal erosion presents an immediate threat. For example, the Pacific Islands enjoy an abundance of wave energy, want to preserve a visually unspoiled environment because of the importance of the tourism industry to their economies, and lack unutilised land. The cost of diesel electricity on islands is likely greater than US 30 cents per kWh. Another emerging application is that of ‘energy islands’, where WSE wave energy converters incorporated into the breakwaters can complement offshore wind farms to supply the grid with more predictable and less intermittent energy. 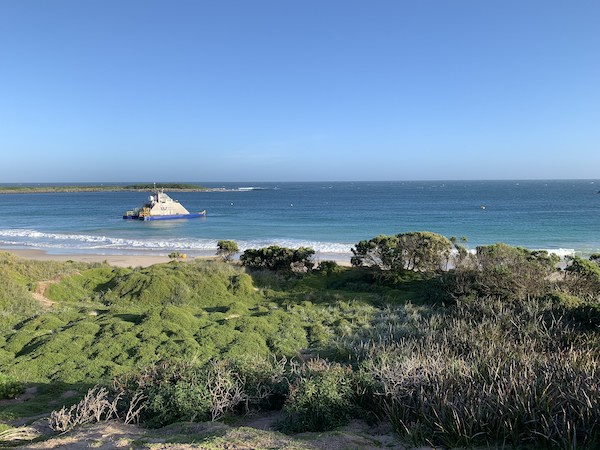