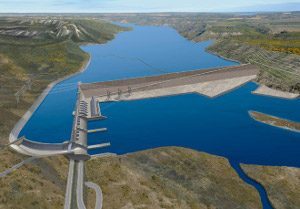 The British Columbia government has approved construction of BC Hydro's 1100MW Site C Dam project, with work expected to start in Summer 2015.

Announcing the approval, Premier Christy Clark said the project will provide British Columbia with the most affordable, reliable clean power for over 100 years. "Affordable, reliable, clean electricity is the backbone of British Columbia's economy," she said. "Site C will support our quality of life for decades to come and will enable continued investment and a growing economy."

Over the first 50 years of Site C's project life, ratepayers are expected to save an average of $650 to $900 million each year, compared to alternatives - amounting to average annual savings of approximately six to eight per cent for the typical household. The project will generate a century of low-cost power, providing enough electricity for about 450,000 homes per year - an eight-per-cent increase in supply to BC Hydro's system in 2024.

As the third project on the Peace River, the firm energy it provides will also support the development of more independent power projects (IPPs) by backing-up intermittent resources, such as wind. IPPs currently provide 25% of B.C.'s electricity and will continue to play a vital role in meeting the province's energy needs.

"Site C is essential to keeping the lights on while maintaining low rates for our customers," said Jessica McDonald, president and CEO of BC Hydro. "This project will build on the success of our existing hydroelectric system and benefit British Columbians for generations to come."

The capital-cost estimate for the project has been updated to $8.335 billion, and government has also established a project reserve of an additional $440 million to account for events outside of BC Hydro's control that could occur over an eight-year construction period, such as higher than forecast inflation or interest rates, for a total of up to $8.775 billion.

The project, which has undergone a thorough and independent multi-year environmental assessment process, will provide approximately 10,000 direct construction jobs.

"Today's announcement is a historic milestone and we look forward to building this important provincial project," said Susan Yurkovich, executive vice-president responsible for Site C. "We will continue to work with First Nations, communities and landowners to ensure that we deliver on our commitments and realize the many benefits of this project."

The project will be built downstream of the W.A.C. Bennett and Peace Canyon dams, and will be the first major hydroelectric dam to be built in the province for 30 years.

The project however looks set to face a serious of lawsuits from environmental groups, who have voiced their opposition to the scheme.