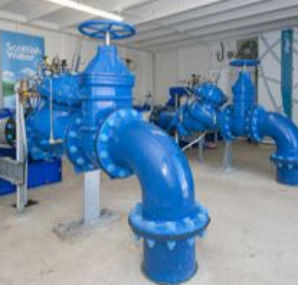 “Black & Veatch has a 40-year history of planning and executing renewable energy projects, thus we are well placed to help clients generate energy from water" commented Steve Canney, Black & Veatch - Director of Capital Delivery. "Through maximised use of existing assets we will further enhance the sustainable benefits of these schemes for Scottish Water."

Some of the principal challenges the hydro projects present include installing new equipment in existing water infrastructure without interrupting service, ensuring efficient performance, and delivering reliability with minimal maintenance.

The considerable flow in large water supply pipes will be used to produce renewable energy, thereby reducing the amount of electricity Scottish Water needs to buy from the National Grid. The work will reduce the power costs for water treatment, playing a key part of keeping Scottish Water's operating expenditure down.

Iain McMillan, Senior Project Manager with Scottish Water, said "We are looking to produce more of our own energy to reduce the long term costs of delivering water and waste water services. In doing so, we can keep customer charges stable and affordable.

“We currently have 10 hydro schemes in operation, while 41 other sites are in development. The project forms a key component of Scottish Water's Climate Change Strategy and efforts to reduce our carbon footprint.

“The hydropower programme aligns with the Scottish Government's aim of building a Hydro Nation, which includes harnessing Scotland's renewable energy potential from water and the wider Scottish Water estate."