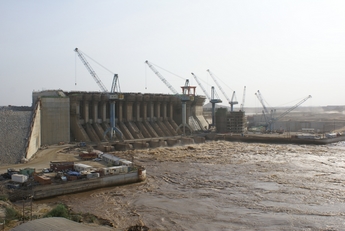 Mounting pressure on water resources across the world, and the potential problems for agriculture, have been highlighted in a report – “Climate Change, Water and Food Security” – just published by the UN Food and Agriculture Organization (FAO). To help address the challenge, a greater focus on measurement, or “water accounting”, throughout the distribution chain is advocated, in particular.

Climate change concerns suggest that large areas in many regions may see alterations in water availability, and the water accounting challenge will run in parallel, and increasingly inform, the strategies and tactics for overall development and modernisation of irrigation infrastructure. In addition, it is suggested, in the FAO report, that “whole life” energy needs – those needed to both build and run assets – are heeded when new investment is to be made in surface and groundwater storage.

Public investment in surface irrigation has given way to more dispersed private investment over the last six decades, and much is dependent on groundwater access, says the FAO report. This shift ‘has underwritten’ the more intensive agriculture in the densely populated areas of Asia, whereas irrigation development in Africa has been ‘patchy’ except for Sudan and Egypt.

It adds that, globally, there is a large stock of ‘decaying capital infrastructure that must be improved and adapted to meet the needs of a more demanding world facing the additional stresses of climate change’. There are further, strategic complications where the assets are in regions that are expected to see lower, or more variable, hydrology or, perhaps, in some delta zones which could be affected by drainage and or social knock-on effects of sea level variation.

The report also states that there is ‘a large stock of under-performing canal irrigation infrastructure, and a vibrant groundwater sector that is competitively depleting its own lifeblood. Both create significant environmental externalities, which need to be managed.’

However, worse for efficiency are the older, furrow/channel-based systems, which was put under the spotlight recently by a different study, co-sponsored by Borealis, and which estimates that more efficient systems could, in Italy alone, save up to Euro17 billion (US$) over 30 years. The findings were released in a report entitled “Water Management Policies in Agriculture”, and the study, performed by Althesys Strategic Consultants, looked at irrigation methods, management models, new technologies, and water intake and distribution grids

The research suggested a combination of investments, innovation and better water management policies could help reduce costs, and a key change would be to move away from open furrow/channel-based distribution. It is noted that such irrigation systems are common to southern Europe and Asia but they lead to ‘substantial water loss’ through evaporation and infiltration.

The other suggested key change is a shift from sprinklers to drip and micro-spray systems.

In July, the matter of water use efficiency in agriculture was also the focus of a workshop – “Water Saving Irrigation and Food Security” – held in Beijing by the International Commission on Irrigation and Drainage (icid) and the Chinese national Committee. It looked at the importance of water savings, the need for national-level actions, the hard/soft approaches of by different countries, the need to ‘revamp’ large irrigation schemes, and the need for technology and information sharing.

The FAO report, looking at prospects for irrigation, says new investment in irrigation ‘will focus much more’ on enhancing the productivity of existing systems in terms of both infrastructure and management. It adds that large surface irrigation systems will need to incorporate improvements in water control and delivery, automation and measurement, and training staff and water users to better help farmers.

It notes further, though, the expectation that irrigation will be under more stress to provide water for higher value uses, especially environmental allocations. The environmental aspect of projects is also expected to be included in a fuller cost-benefit assessment of irrigation and drainage systems. The report says: ‘The success of irrigation has often come at the environment’s expense, degrading ecosystems and reducing water supplies to wetlands. It has also had mixed impacts on human health.’

While many challenges face the irrigation sector, like others, a number of projects are underway or in development, such as:

One of the largest irrigation schemes under development in Africa is Merowe, to be built 200km downstream of the recently completed dam of the same name on the Nile River. Just before the close of last year, German consultant lahmeyer was awarded a contract (PC1) to provide construction supervision services for the Merowe irrigation project. The contract award follows earlier studies and design work by the consultant on the irrigation scheme.

The project is to irrigate 90,000 ha of agricultural land and calls for an extensive distribution network of canals – a 27km link canal and totals of 184km and 101km of main and secondary canals, respectively. The infrastructure works are also to include one river and two booster pump stations. The anticipated construction period is about four years.

Commissioning of the 1250MW (10 x 125MW Francis units) Merowe power stations was completed in early 2010. Lahmeyer began work on the scheme in 2003, providing a full package of technical and procurement services, and the warranty period ends in mid-2012. The project involved construction of CFRD and embankment dams.

Another, reasonable-sized scheme under development will see the Ribb and Megech-Seraba projects established in the Amhara region of Ethiopia. The World Bank, in June, approved extra funding of US$60 million to top-up funds already provided to help develop 20, 000ha of agricultural land through two new schemes.

The original funding was approved four years ago but more is needed due to higher cost estimates following more, detailed, engineering studies, the bank says. Compared to the initial estimates those made at the detailed design stage for Megech-Seraba, and the feasibility stage for Ribb, are in total about 80% higher, it adds.

The initial estimates were made in 1999 and were based on pre-feasibility studies, though the bank adds that high inflation of recent years has also increased cost estimates. The new credit covers the majority of the new funding shortfall of US$68.7 million, including physical costs and price contingencies, it says.

The extra funds will also help to meet an increase in budget for the environmental management plan of the projects. The banks adds that despite the higher cost of the scheme there would still be a positive return on the cost of capital. Proceeding with Megech-Seraba but delaying full completion of Ribb was discounted as the overall cost would have been even higher, and also convey uncertainty over the scheme.

However, due to the need for the extra engineering studies the construction schedule has been pushed back, and extended. It was originally due to be completed by late 2015, eight years after approval, but is now expected to be finished before the end of 2017. Two dams – Ribb and Megech, are to be built and procurement is accelerating for the contracts.

Separately, a number of other multipurpose projects are under study or development in Ethiopia, such as with the Mandaya and Beko Abo projects, the Genale-Dawa river basin and Beles II.

Australian consultant SMEC has been working on a couple of irrigation contracts in Africa –undertaking the Eastern Nile irrigation and drainage feasibility study, and providing services for the Magwagwa multipurpose project in Kenya.

The Eastern Nile study was funded by the African Development Bank (AfDB) and, last year, it focused on irrigation schemes in Ethiopia and Sudan, though mostly the latter country. SMEC says the study was to focus on water efficiency and agricultural productivity to help develop an integrated approach to development in the sub-basin, and so enhance food security as well as reduce poverty and improve sustainability of natural resource management.

The Magwagwa project is to impound water for irrigation, water supply, hydropower, fisheries and also some tourism. To be examined over two phases, the project saw SMEC focus initially on the feasibility study and preliminary design. The consultant’s package of services to the Kenyan Government will then cover development of the detailed design and tender documents.

On the other side of Africa, in Nigeria, construction of the Gurara multipurpose project is underway with Italian contractor Salini executing the works for the Ministry of Energy and Water Resources.

The Gurara project is located approximately 150km from Abuja, in the region of Kaduna. The irrigation element of the project, at 2000ha, is relatively small compared to many other schemes but Gurara will also include significant water supply and some hydropower elements to exploit the impounded reservoir that is being built.

Beyond Africa, a number of irrigation and multipurpose developments are underway in other continents, and also modernisation projects. To give one example, there is the modernisation of the very old and mature, traditional Rani Jamara Kulariya scheme in Nepal. The World Bank approved funding of US$43M, in July, for the first phase of the modernisation programme, through a combination of long-term credit and a grant.

More than a century old and comprising three independent irrigation systems, the Rani Jamara Kulariya scheme is one of the most prominent farmer-managed schemes in the country. The project is to improve water reliability and efficiency, and the improvements will also help reduce abstraction required from the ‘aggressive and unpredictable’ gravel-bed Karnali River which often changes course.

Key works include substantial rehabilitation and upgrading of the main and secondary irrigation and drainage systems and flood management infrastructure, and support activities are training.