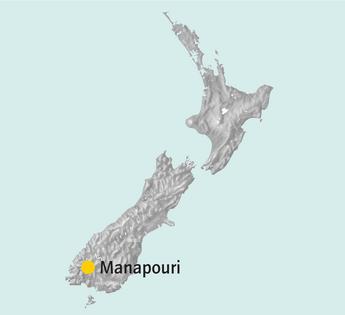 UNDER contract to Meridian Energy Ltd, the Manapouri hydro power station’s adaptive management programme is headed by Dr Mark Gibbs of the Cawthron Institute and brings together some of New Zealand’s foremost environmental scientists. The programme will involve the continuation of environmental monitoring of the effects of the Manapouri on the Doubtful Sound marine system, Fiordland, New Zealand.

The station started generating electricity in 1969 and was fully commissioned in 1972. During the late 1960s the controversy surrounding the project became an issue of national significance that raised the environmental consciousness of the nation. In the run-up to New Zealand’s 1972 general election a petition against raising Lake Manapouri by 30m was signed by almost 10% of the New Zealand population. The petition was successful and the lake level was not raised. It is against this backdrop of environmental sensitivity that Meridian Energy is committed to the ongoing sustainable management of the facility.

The Manapouri power station generates around 5000GWh/yr. It was built in tandem with the Bluff aluminium smelter, and still supplies most of its electricity directly to the smelter. The station is managed by state-owned Meridian Energy, and operates in an area of huge environmental significance. Much of Fiordland has been designated a National Park, and the area around Manapouri has received World Heritage status. As a result, Meridian operates the power station under strict environmental standards.

The Manapouri hydro power station is New Zealand’s largest hydro facility with a current maximum output of around 730MW. It is unusual in that it is not a dam or canal; water enters the power station from the western end of Lake Manapouri and falls around 180m through seven penstocks to drive seven Francis turbines installed in a large underground cavern excavated from solid rock. This water is channelled through a common manifold and then flows 10km through two tailrace tunnels built under the mountains that surround Lake Manapouri, discharging into Deep Cove, which connects to the Tasman Sea through Doubtful Sound. The first tailrace tunnel was built in the late 1960s when the power station was commissioned. The second tunnel was commissioned in 2002 resulting in major energy efficiency gains from increases to net head capacity. Further efficiencies will be realised in 2007 by the turbine runner replacement project currently underway.

Doubtful Sound is located on the southwestern coast of the South Island of New Zealand, and is one of 14 glacially carved fiords in this region. Doubtful Sound is approximately 37km long and generally less than 1km wide. The fiord is surrounded by mountainous terrain; hence the walls of the fiord both above and below the water surface are steep, and the water depth within Doubtful Sound is greater than 400m in places. The area is rugged and remote, with many areas only accessible by helicopter or boat. There is a commercial wharf in Deep Cove, at the head of Doubtful Sound, which provides mooring for tourism cruise boats. There is also a school lodge which is used as a base for educational field trips in the area. The very popular tourist destination Milford Sound is north of Doubtful Sound.

A combination of prevailing onshore winds blowing off the Tasman Sea and the mountainous catchment results in an exceptional level of rainfall (more than 7m per year). The resulting natural run-off from the 142 small rivers, streams and waterfalls in the surrounding mountains must ultimately find its way out to sea, and as a result there is a mean outflow of low-salinity-water along the surface of the fiord (above the oceanic water). This natural freshwater input is enhanced by the inflow of lake water discharged into Deep Cove from the Manapouri power station tailrace, which averages around 409m3 a second with a maximum consented discharge of 510m3/sec. Together the natural run-off and the tailrace inflow result in the existence of a robust, year-round low-salinity-layer which is typically 1 to 4m deep. The year round presence of the low-salinity-layer is in contrast with Scandinavian fiords where such layers tend to be seasonal features. The fact that there are a number of unusual marine plants and animals in Doubtful Sound is partly, and in some cases largely, due to the presence of this low-salinity-layer. This is primarily because only some species can survive in the low salinity upper waters in the upper layers, and also the low-salinity-layer contains humics that reduce the light in the high salinity water beneath.

The Manapouri hydro-electric power station has been discharging freshwater into Doubtful Sound since the station was commissioned in 1969. For the majority of the life of the station, little monitoring or assessment of the effects of this freshwater inflow into the Sound was performed. However, in 1996 the conditions of the newly granted discharge consent paved the way for a comprehensive monitoring programme to be established, some 28 years after commissioning of the station. This programme, which was undertaken by the Marine Science Department of Otago University, was implemented in 1997, and has generated seven years of baseline information on the effects of the freshwater discharge to Doubtful Sound.

The programme was of an unprecedented scale for an ongoing discharge in New Zealand. The data collected under this programme, along with work performed by other investigators, has lead to significant improvements in the understanding of the Doubtful Sound system, and the effects of the tailrace discharge. Notably, for the first time ever, the dominating role of wind on low salinity layers in fiord systems was able to be understood and modelled.

Following the commissioning of the second tailrace tunnel, and a review of the old monitoring programme, Meridian Energy brought together key marine scientists and stakeholders to discuss the development and continuation of a new monitoring regime for Doubtful Sound. It is widely acknowledged that the initial discharge of freshwater in early years following commissioning had a significant impact on aspects of the Sound’s ecology, for example inter tidal communities. However the original monitoring programme was able to show that overall there were no long term increasing impacts of concern on the Doubtful Sound system. The key to the new programme is that it be designed to continue ensuring the ongoing operation of the Manapouri power project does not cause additional adverse environmental effects to the Doubtful Sound system.

The main question that the environmental monitoring programme needs to answer is whether the change in discharge regime resulting from the second tail race tunnel becoming operational has had any adverse consequences on Doubtful Sound. This is made difficult due to the environmental complexity of the Doubtful Sound system, and the fact that the influence of flows from the tailrace tunnels is confounded with natural inputs of freshwater. Due to the complex nature of the system, and the high level of stakeholder involvement, scientists from the Cawthron Institute in Nelson suggested the implementation of an adaptive management programme. Adaptive management can be defined as an iterative approach to managing ecosystems, where new knowledge is used to update management practices. It is a flexible approach, whereby scientific principles and methods are used to improve management of a resource incrementally, as stakeholders learn from experience (ie. from the results of previous monitoring programmes). Adaptive management has become an important concept in resource management, as it is a tool that focuses on management outcomes rather than simply the acquisition of scientific information.

Meridian Energy has contracted the Cawthron Institute to undertake the adaptive management programme in Deep Cove. The programme is being led by Dr Mark Gibbs, and along with other Cawthron scientists, involves senior scientists from NIWA (National Institute of Water and Atmospheric Research) and the University of Otago in Dunedin.

Within the adaptive management framework, the environmental monitoring programme stipulates that data be collected on both biological and physical parameters. Biological monitoring occurs on an annual basis; during these intensive fortnight-long trips a team of divers collect a large amount of data on the inter- and sub-tidal communities living on the rock walls, as well as on key species which are likely to be sensitive to changes in the environment. One of these species is the black coral, some of the colonies of which are thought to be up to 200 years old. This species usually grows in much deeper waters, but due to the presence of the low-salinity-layer it is able to grow at shallower depths in Doubtful Sound.

Data on physical attributes of the water column (salinity and temperature) are collected by oceanographic instruments deployed at seven sites in Doubtful Sound. A mooring is also deployed at a site in neighbouring Milford Sound, and the biological communities at four sites in Milford are also monitored to provide a control data-set. A continuous time series of hourly rainfall, air temperature and wind speed/direction measurements are also collected, along with freshwater discharge rates from the power station tailrace.

The adaptive management framework allows scientists to evaluate a complex, dynamic system, as well as providing a consultative process to address any affects detected as a result of the monitoring, through the iterative nature of adaptive management. The results of the environmental monitoring programme are reported annually and as part of the iterative approach they are then assessed by Meridian Energy, the science providers and the Doubtful Sound Monitoring Programme Focus Group (a stakeholder group). The initial intensive phase of monitoring will continue until it has been adequately demonstrated that there is no increasing pattern of change to the marine environment in Doubtful Sound that could be attributed to the increased discharge as a result of the second tail race tunnel.

Once the effects are deemed as ‘acceptable’ by all parties, a smaller-scale long-term monitoring programme will be developed and implemented.

At a cost of over US$1.5M, the original programme was a major investment for Meridian Energy. The first two years of the new adaptive management programme will cost in the order of US$565,000. It is expected that this level of cost will be rationalised in following years as the focus of the programme adapts from initial intensive efforts to answer the post second tailrace questions to a longer term programme. While significant, such costs are representative of Meridian’s commitment to sustainability and the acknowledgement that operating big infrastructure in a National Park is a responsibility that must be taken seriously.