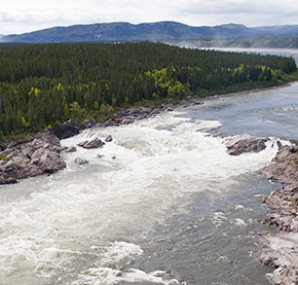 The Honourable Kathy Dunderdale, Premier of the Canadian Province of Newfoundland and Labrador, has announced the completion of the federal loan guarantee and financing for the 824MW Muskrat Falls Hydroelectric Project.

“A year ago, we announced sanction of the Muskrat Falls Project and celebrated a shared vision with our partners for a secure energy future through the development of this nation-building project," commented Premier Dunderdale. "Today's announcement is the culmination of hard work and a strong commitment to drive this project forward. We thank the Prime Minister for fulfilling his commitment on a loan guarantee and for recognizing the value of Muskrat Falls to our province, the Atlantic region and the country. This is truly an exciting day for Newfoundlanders and Labradorians as we write another chapter in the province's energy story."

The loan guarantee is expected to result in projected savings of $1B in interest costs for ratepayers and contribute to stable electricity rates for consumers in the province.

“Today's announcement is a testament to our Premier's leadership and reaffirms our government's confidence in the Muskrat Falls Project," added Derrick Dalley, Minister of Natural Resources. "We have done our due diligence right from the start on this project to ensure it is in the best interest of Newfoundlanders and Labradorians and we have achieved a project that will be a source of renewable electricity generation in Newfoundland and Labrador. This project will accrue significant benefits directly to the people of our province for generations to come."

“Arrangements to secure the federal loan guarantee, long-term debt financing, and equity financing have all been successfully completed. Achieving this milestone provides certainty with respect to how the Lower Churchill Project will be financed and the costs of this financing over the next 40 years," added Ed Martin, President and Chief Executive Officer, Nalcor Energy.

The Muskrat Falls development, along with the 2250MW Gull Island project, is part of a large plan to develop the lower Churchill River. Crown Corporation Nalcor Energy is responsible for the project development.