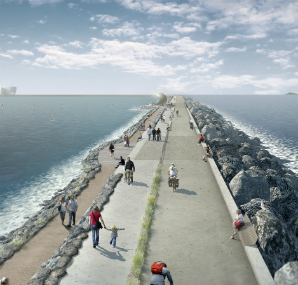 A consortium of GE and Andritz Hydro is to supply electromechanical equipment for the world's first tidal lagoon hydropower project in Swansea Bay, Wales.

The consortium was named the preferred bidder by developer Tidal Lagoon Swansea Bay plc following a competitive international bidding process. The firms have signed an advance works agreement, with the contract valued at around EUR 400 million, EUR 250 million of which will be fulfilled by Andritz.

British industrial components and expertise are expected to be at the heart of the project, after the two companies committed to a majority of British large turbine components and generators, and to the operation of a dockside Turbine Assembly Plant in Wales that will employ an initial 100 skilled workers. The turbines will be based on well-proven Andritz Hydro global technology.

The project's sixteen generators - the highest value component in the 700 tonne turbines - will be produced at GE's Rugby facility, sustaining employment and investment there. In addition, GE is working on plans to potentially re- shore its medium voltage switchboard operations for the UK tidal lagoon industry at its Kidsgrove facility. This could create further UK jobs and position GE well for further tidal opportunities in the UK.

"Today's announcement by these two global businesses is a massive vote of confidence in our highly skilled workforce," said Welsh Secretary Stephen Crabb. "This project, if planning consent is granted, has the potential to transform the South Wales economy by creating hundreds of jobs and countless supply chain opportunities for local businesses across the region.

"It would also help secure our nation's energy future and position Wales as a pioneer in low carbon technology. That's why I am right behind this scheme and want to see it built in Wales."

The tidal lagoon hydropower plant will be located in the Severn Estuary and will have an installed capacity of 16 units with over 20MW each. The Severn Estuary has the second highest tidal range in the world, and in this estuary, Swansea Bay benefits from an average tidal range of 8.5m during spring tides. The plant will supply clean, renewable, and predictable power for over 155,000 homes and contribute significantly towards national carbon emission reduction targets with over 236,000 tons of CO2 saved each year.

Start of commercial operation is scheduled for 2019.