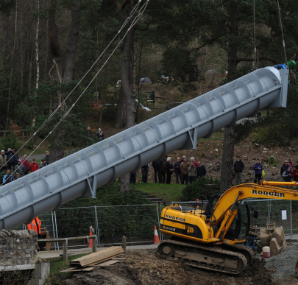 The world's first house to be lit by hydroelectricity is once again being powered by water thanks to the installation of an Archimedes screw at Cragside Estate in England, UK.

The house, previously owned by Lord Armstrong, was powered by a hydro system installed in 1878 which used water from the lakes on the estate. Now conservation trust, The National Trust, have introduced a new modern hydro system featuring a 17m long Archimedes screw which will produce enough energy to light the 350 bulbs in the house, and enable Cragside to retell its story.

The system will produce about 12kw of electricity and over the course of a year will provide the property with around 10% of its electricity needs.
“It is a very visual demonstration of the way hydro power works, an almost sculptural sight in the landscape. Lord Armstrong was an exceptional man with an ingenious mind and the prospect of bringing his vision for Cragside into the 21st century is a dream come true," commented Andrew Sawyer, Property Curator at Cragside. "Hydroelectricity is the world's most widely used form of renewable energy, so we are looking forward to sharing this very special part of its heritage."

Patrick Begg, Rural Enterprises Director at the National Trust, added: "To install a scheme that reflects the character of one of our places so directly is unique. It not only makes economic sense but adds so much depth to the story this special house has to tell.

“This technology is another key step in our clean energy journey and will help one of our biggest properties in the north east to generate its own electricity."

Alongside this project, an ambitious plan was launched last year by the National Trust, in conjunction with the 100 per cent renewable electricity supplier Good Energy, to provide clean energy to a further 43 of the charity's historic properties.

Through its clean energy generation and with energy conservation work, the Trust hopes to save an estimated £4 million from its energy bill each year - which it can plough straight back into conservation work at the places it looks after.

Image: The new Archimedes screw being installed at Cragside. Courtesy of North News and National Trust