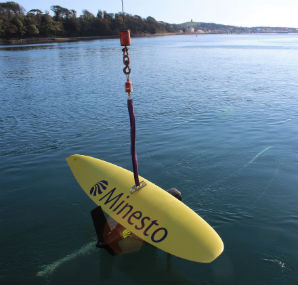 Minesto won the prize for having proved that it is possible to harvest electricity from low velocity currents using the step-change Deep Green power plant -"the underwater kite".

A quarter scale prototype of Deep Green is currently producing electricity in the waters off Strangford Lough, Northern Ireland. Deep Green is the only known marine power plant designed to produce electricity from low velocity tidal and ocean currents, and as such significantly expands the global marine energy potential, the company said.

Minesto received the award during the international conference on tidal energy, The International Tidal Energy Summit, which was held in London last week. Tidal Energy Awards were handed out in five categories, of which Minesto won the Industry Pioneer Award for "having created a pathway for other companies" in the tidal energy industry. The award winners were selected by an impartial panel of industry experts.

“We are proud to receive this very prestigious international award," said Anders Jansson, CEO, Minesto. "It is rewarding to know that tidal energy industry experts think that Minesto deserves the title as 'industry pioneers'. It shows that the entire industry is interested in, and impressed by, the success we have had with Deep Green and the fact that we now produce electricity from low velocity currents."