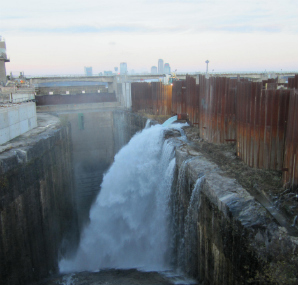 In March 2013, after eight years of tireless work, the largest hydroelectric project in Ontario in the past 50 years came to completion to the cheers of hundreds of onlookers. The new 10.2km tunnel is now channeling additional water from the Niagara River to Ontario Power Generation's (OPG) Sir Adam Beck Generation Station, with the water travelling at a rate of 500m3/sec. The tunnel delivers enough water to increase average annual energy output by 1.6BkWhr - enough to supply 160,000 Ontario homes with clean, renewable hydroelectric power.

Ontario is rapidly emerging as an international hub for developing innovative clean tech solutions and delivering them to markets worldwide. The Niagara Tunnel Project, which was built at a cost of $1.6B, is part of Ontario's long-term energy plan to produce and use clean and renewable sources of energy including wind, water, solar, biomass and biogas. Today, more than 80% of electricity generated in Ontario comes from these clean energy sources, and by the end of 2013 Ontario will close down its last two coal plants in southern Ontario - a full year ahead of schedule.

But it's not just about power generation. The province recently completed a $1B rollout of 4.7 million smart meters - one of the largest smart grid deployments in North America - and is now investing nearly $2B to further improve its smart grid infrastructure.

Like Ontario's long-term energy strategy, the Niagara Tunnel project is ambitious in every way: in physical scope and technical complexity - the tunnel has a world record-breaking diameter of more than 14m, almost twice the diameter of the Euro Channel Tunnels. Austrian firm Strabag SE was hired as the design-build contractor and engineering firm Hatch Mott MacDonald Ltd. provided technical and management oversight. Robbins, a manufacturer of underground construction machinery, was contracted to build the world's largest hard-rock tunnel boring machine for the project. Fully assembled, the 4,000-tonne Big Becky - nicknamed by local school children - measured an impressive 150m long and 14.4m high, as tall as a four-storey building. To bore its way from the tunnel's outlet to the intake at the other end, Big Becky was required to bore through more than 1.7Mm3 of rock. Its 85 disk cutters could cut through about 2.5m of hard rock per hour.

Construction at the outlet began in September 2005. Six months later, Strabag and its subcontractors started working at the intake, located near International Niagara Control Works, part of the system that controls the volume and flow of water over the Horseshoe and American Falls. Then Big Becky started drilling in September 2006.

The project has provided employment and about $1B in economic benefits to the Niagara region. At its peak almost 600 people were employed directly on the project. But as might be expected with an undertaking of this magnitude and complexity, there have been a number of challenges along the way.

Machine and crew faced difficult ground conditions, characterized by high in situ pressure, swelling rock, aggressive groundwater, and steep grades at either end of the tunnel. To address overbreak problems with the Queenston Shale rock formation surrounding sections of the tunnel, OPG realigned part of the tunnel and reduced its length by about 200m.

After Big Becky pushed through to the intake end of the tunnel in May 2011, the crew moved on to Phase II of the project, which involved installation of a waterproof membrane and about 400,000m3 of cast-in-place concrete lining.
Some people have wondered if the Niagara Tunnel might affect the water flow over the Horseshoe Falls. The 1950 Niagara River Water Diversion Treaty stipulates the minimum flow over the falls for scenic purposes therefore the scenic flow commitment will not change. However, when the tunnel is in service, power flow available to Canada will exceed OPG's diversion capability less than 15% of the time.

With the Niagara Tunnel complete, Ontario has moved one step closer to its goal of generating 9,000 megawatts of hydro power by 2018 and creating a diverse and reliable supply of clean, renewable energy for Ontarians. This is a significant provincial achievement and one that will provide Ontario with a source of clean energy for the next 100 years.