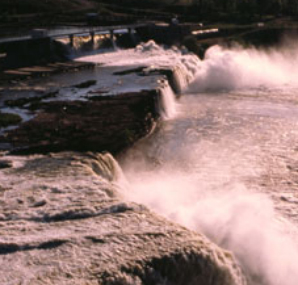 US energy company PPL Montana has announced it has successfully completed a three-and-a-half project to expand its Rainbow hydroelectric project on the Missouri River near Great Falls.

The $209M Rainbow project is the largest single private investment in Cascade County's history. It created more than 200 local construction jobs, spurred business activity and boosted the local economy. With the project complete, PPL Montana expects to qualify for investment tax credits or a federal grant made available through the American Recovery and Reinvestment Act of 2009. The incentives were a major factor in the company's decision to build the facility after it was delayed in 2008 due to the financial crisis.

With a single, 60MW unit in the new powerhouse, PPL Montana increased the amount of clean, renewable power it generates at Rainbow by 70%. Smaller units, installed between 1910 and 1930 with a combined capacity of 35MW, were replaced with the single unit that can generate enough electricity to power about 45,000 homes. The new unit completed testing last month and began commercial operation on April 22.

“This is an exciting moment for our employees," said Jeremy Clotfelter, manager of Hydro Operations and Management for PPL Montana. "We are looking forward to the next phase of generating power at Rainbow."

In addition to the expansion of the plant, PPL Montana completed a $38M Great Falls 100kV interconnection project, which will improve the reliability and efficiency of the electrical systems connecting PPL Montana's five Great Falls hydro plants to NorthWestern Energy's grid.

Other environmental benefits include a new turbine with wider flow passages and fewer rotating surfaces, making it easier for fish to pass through unharmed.

“PPL Montana is proud to invest in the state of Montana and make responsible use of our state's valuable natural resources," said Pete Simonich, vice president and Chief Operating Officer of PPL Montana. "We thank everyone who was involved in the design and construction of this project, and appreciate the outstanding support we have received at every step along the way."