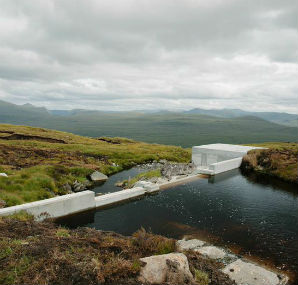 A 465kW hydroelectric scheme part-funded by a community group in the Scottish highlands has been commissioned a month ahead of schedule, developer Green Highland Renewables has announced.

The development on the Abhainn Shalachain River in the Morvern peninsula was switched on in January and is now producing power to the National Grid, creating revenue which can be used locally.

In 2014 the people of Morvern became the first community group in Scotland to invest their own money in a hydro scheme on land managed by Forestry Commission Scotland. In total the Morvern Community Development Company and Morvern Community Trust invested £30,000 in the development.

Their stake will now provide the community with regular income in addition to the standard £5000 per annum per megawatt community benefit payment associated with onshore renewable projects.

"We're pleased to see this project up and generating full power ahead of schedule. It is good news for the local community, Green Highland Renewables and Triple Point, who we are working in partnership with to develop a number of schemes in our extensive portfolio," commented Green Highland Renewables CEO Richard Round. "The next two years will be extremely busy across the whole hydro sector in Scotland and we are very focussed on ensuring we deliver every scheme in our pipeline."

Welcoming the news Dr Aileen McLeod, The Scottish Government's Environment, Climate Change & Land Reform Minister said: "This is an excellent example of how Scotland's National Forest Estate is helping put communities at the heart of their own prosperity.

"Through this partnership, public land is being used to generate renewable energy and provide an income to a rural community. This is positive news, empowering the community to take an economic stake in new developments."

Speaking on behalf of the Morvern Community Development Company and Morvern Community Trust, Angus Robertson, lead MCDC director for the project added: "We believe strongly in community ownership and development of our own natural resources. We would have liked to be able to afford a larger share but are delighted to be a part of it. We thank the development team and are looking forward to a nice wet future."

Green Highland Renewables is currently managing around 40 projects and has fully consented more than 50 sub-2MW schemes to date. The Abhainn Shalachain hydro project is one of a number being developed by the Perth based hydro firm and other energy companies as part of a renewables programme being promoted across land managed by Forestry Commission Scotland.

Through this programme, communities have an option of investing their own money into schemes for a regular income.