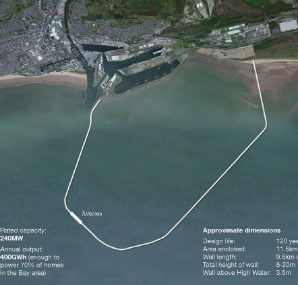 Development of a planned tidal lagoon project in Swansea, Wales, could lead to £300M of regional spending in the country over a three-year period, recent research has suggested.

Professor Calvin Jones and Professor Max Munday from the Welsh Economy Research Unit (WERU) based at Cardiff Business School have examined the economic effects the planned construction of the Swansea Bay Tidal Lagoon will have on Wales and the UK.

The Tidal Lagoon would be the world's first, purpose-built, tidal energy lagoon, capable of generating predictable, renewable electricity for over 120,000 homes for over 120 years.

The report estimates that the project would lever close to £300M of regional spending spread over a three-year development period. This could result in a total additional £454m of additional output in Wales.

The report also estimates that the economic effects of tourism could bring in approximately £1.5-£2.1M and 65-90 full time tourism jobs would be available per annum once the Lagoon was operational.

“We estimate that the £300m of regional spending evenly spread over a three year development period starting in March 2015 will result in a total of an additional £454m of additional output in Wales," said Jones. "This means for every £1M spent in the region, an estimated further £0.52M of economic activity is supported. Around half of this, almost £223M, is in the construction sector, with manufacturing and production the next largest portion at £170m. We estimate around £34M of output in financial and professional services would be supported, largely comprising project management, planning and engineering activities."