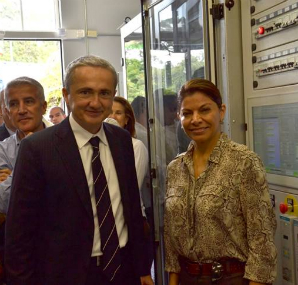 STE Energy, part of the Sorgent.e Group, has announced the refurbished Tacares hydroelectric project has been officially inaugurated in Costa Rica, in a ceremony attended by President Laura Chinchilla Miranda.

The Tacares power plant on the Poás river was originally built in the 1930s with the aim of powering the old San José-Alajuela railway. STE Energy executed the complete revamping of the plant, supplying all the electromechanical equipment including two new horizontal axis Francis turbines. It also developed the plant's automation, and provided complete support for the plant's connection to the grid.

The refurbishment project, which required an investment of around US$15M, provided significant challenges due to its configuration. The powerhouse is located in an area that can be reached only on foot or with a cable railway allowing the transport of small equipment and components facing a 90m slope and an inclination of 45 degrees.

“The opening of the Tacares power plant, Sorgent.e's fifteenth plant in Latin America proves our choice of internationalization, focusing on areas with a strong energy demand and with massive growth potential within the field of renewable energies and particularly hydroelectricity," commented Daniele Boscolo Meneguolo, Sorgent.e's CEO.

The official inauguration ceremony was held on October 24, and was attended by President Chinchilla Miranda, Italian Ambassador Francesco Calogero and CEO of STE Energy, Mario Arquilla.