Developers of the Snowy 2.0 pumped-storage scheme, the largest renewable energy project in Australia, have celebrated its inaugural tunnelling milestone, with the project’s first tunnel boring machine (TBM), the Lady Eileen Hudson, passing the 1km mark of the 2.6km main access tunnel, which leads to the site of the underground power station cavern. The milestone comes after it was also announced that the second of three TBMs at the project has now been officially commissioned.

Minister for Industry, Energy and Emissions Reduction Angus Taylor said Snowy 2.0 is going from strength to strength: “Reaching this critical milestone brings Snowy 2.0 closer to delivering 2000MW of fast-start, dispatchable energy needed to make our grid secure and keep pressure on power prices for Australian families and businesses,” he said.

Snowy Hydro Managing Director and CEO Paul Broad said the tunnelling achievement highlighted the Snowy 2.0 project’s outstanding construction progress. “It’s an exciting time in the mountains with Snowy 2.0 – this is a megaproject that’s on-budget and due to produce first power in 2025 as planned.

“Tunnelling at Lobs Hole is going very well, with about 4,500 concrete segments manufactured locally at our factory in Cooma used to create 500 rings to line the first kilometre of the main access tunnel. In total, around 130,500 segments will be produced for the Snowy 2.0 tunnels.

“We are also getting ready to launch our second TBM, named Kirsten, with our principal contractor, Future Generation Joint Venture.”

Australian Prime Minister Scott Morrison joined Snowy Hydro Ltd and the Future Generation JV at the official commissioning of Kirsten, the most technologically advanced of the three TBMs deployed for the development of the Snowy 2.0 on 6 December. 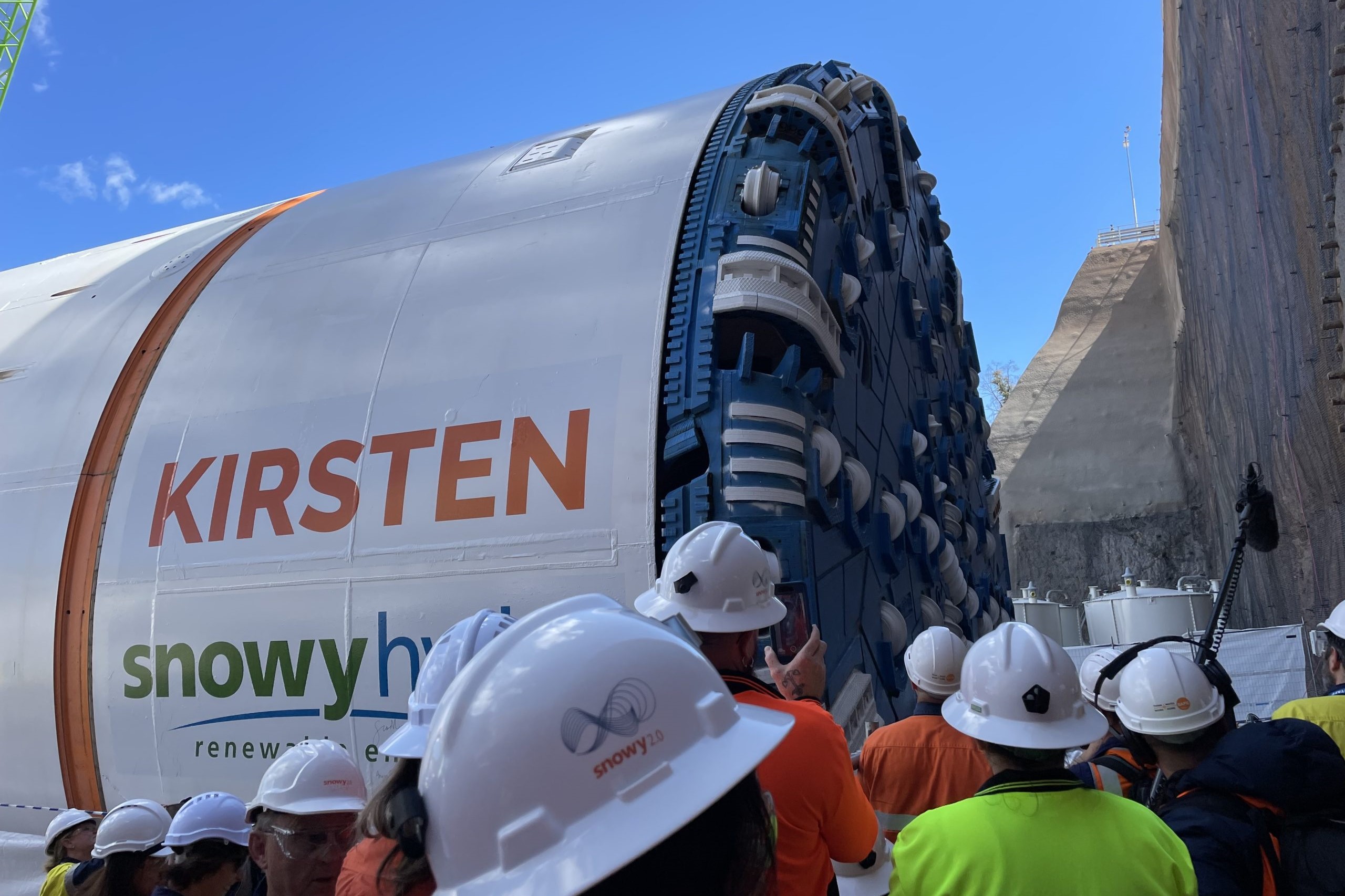 Built specifically for Snowy 2.0 by Germany’s Herrenknecht AG in collaboration with Webuild, the TBM, named after Australian astrophysicist Kirsten Banks, is a single-shield, open-mode machine designed to deal with hard rock conditions. Its most innovative feature is its ability to excavate at steep angles: up to 9% (five degrees) on declines and up to 47% (25 degrees) on inclines.  With a diameter of approximately 11 metres, the TBM can excavate up to 30 metres of rock per day. At 205 metres in length, it is one of the longest of its kind in operation in the world. It will be responsible for the Emergency, Cable and Ventilation Tunnel, Inclined Pressure Shaft and 2km of the Headrace tunnel - more than 6 kilometres of tunnelling.

Approximately 1,400 people are working on Snowy 2.0, with 150 local businesses involved. Approximately 4000 jobs are expected to be created during the life of the project.

Built by Future Generation - a joint venture between Webuild, Australian partner Clough and Lane Construction, a US subsidiary of Webuild - Snowy 2.0 will link the existing Talbingo Reservoir with Tantangara Reservoir through a network of tunnels. There are three Snowy 2.0 TBMs which will collectively tunnel more than 27km.