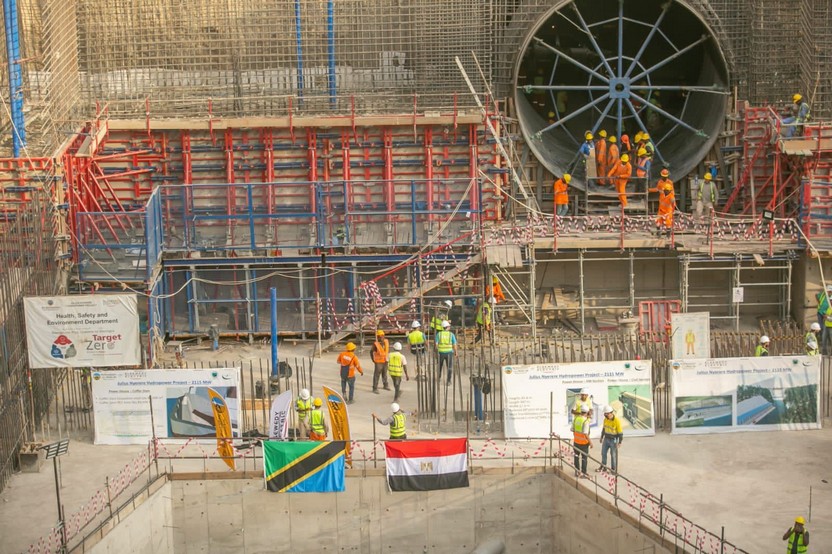 A joint venture of The Arab Contractors and Elsewedy Electric has begun installation works of the first turbine parts for the Julius Nyerere Hydropower Plant and Dam in Tanzania, Eqypt’s Minister of Housing, Utilities and Urban Communities Dr. Assem El Gazzar has announced.

The works began in the presence of officials of the Ministry Energy and Tanzania Electric Supply Company (TANESCO). The project will feature 9x235MW turbines, for a total capacity of 2115MW.  Installation work comes following completion of relevant civils works carried out by Egyptian and Tanzanian engineers and technicians.

Eng. Sayed Farouk – Chairman & CEO of the Arab Contractors Company announced that the project is progressing according to schedule, and expressed appreciation for the support provided by the Egyptian government through supervision and follow up by the Ministry of Housing, Utilities and Urban Communities. He pointed out that 158,000m3 of compacted concrete has recently poured into the dam body within 20 days to take advantage of the current dry season, meaning the total amount of compacted concrete poured in the project has reached 685,000m3 since the river diversion on 18th November 2020, in addition to the temporary dam works to retain water which required 85,000m3 of concrete.

Eng. Ahmed Elsewedy, CEO of Elsewedy Electric Company, explained that the Egyptian JV started installing parts of the electricity generation units in the turbine building, where four sections weighing 37 tons were installed from a total of 17 sections representing the bottom of the hydroelectric turbine No. 9. It is considered an important event as the manufacturing and shop drawings for the entire lower part of the turbine were prepared by the Egyptian JV’s engineers and it was manufactured on site by the Egyptian technicians. It passed all quality tests successfully before being installed in a ceremony witnessed by the senior officials of the project owner, Tanzania Electricity Supply Company (TANESCO). The poles carrying cables that will transmit electricity to the national network in Tanzania are currently being installed.

Julius Nyerere features a main dam with total length 1025m at crest level and 131m height with a capacity to impound approximately 34 billion m3 of water. The plant is located on Rufiji River in Selous Game Reserve at Morogoro area, South West of Dar es Salam. It will be the biggest plant in Tanzania with a capacity of 6307MW/hr per year; with the generated power transferred by 400kv transmission lines to a substation where the generated power will be merged with the public power grid. In addition to these, the project includes the construction of four saddle dams for reservoir impounding.

It will feature a main spillway located in the centre of the main dam, an emergency spillway and a 660m long diversion tunnel. In addition to the construction of three water transfer tunnels, it includes a permanent concrete bridge and two temporary bridges on Rufiji River. 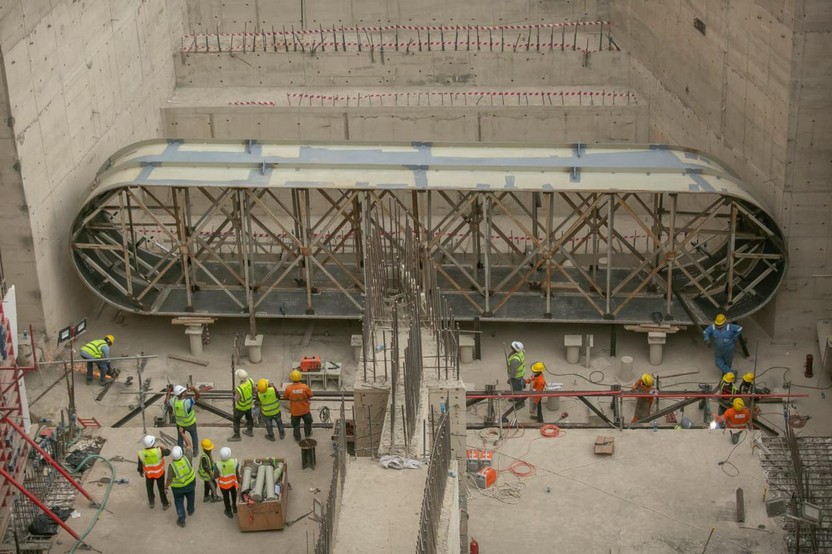