A collaboration project between NASA and the French space agency Centre National d’Études Spatial (CNES), with contributions from the Canadian Space Agency and the UK Space Agency, is set to measure the vast majority of Earth’s lakes, rivers, and reservoirs in what has been described as the world's first global freshwater survey.

The Surface Water and Ocean Topography (SWOT) satellite is scheduled to launch in November from Vandenberg Space Force Base in California. Engineers and technicians are finishing up work on the satellite in a facility run by Thales Alenia Space in Cannes, France.

Some of the tasks planned for SWOT include measuring the height of water bodies on Earth’s surface, and to measure more than 95% of Earth’s lakes larger than 15 acres (6 hectares) and rivers wider than 330ft (100m) across. Over the ocean, the satellite will be able to “see” features like eddies less than 60 miles (100km) across – smaller than those that previous sea level satellites could observe.

“Current databases maybe have information on a couple thousand lakes around the world,” said Tamlin Pavelsky, the NASA freshwater science lead for SWOT, based at the University of North Carolina, Chapel Hill. “SWOT will push that number to between 2 million and 6 million.”

Along with measuring the water height – whether it be in a lake, river, or reservoir – SWOT will also measure its extent, or surface area. That crucial information will enable scientists to calculate how much water moves through freshwater bodies. “Once you get hold of the volume of water, you can better assess the water budget, or how much water flows into and out of an area,” said Lee-Lueng Fu, SWOT project scientist at NASA’s Jet Propulsion Laboratory in Southern California, which manages the U.S. portion of the mission.

SWOT will provide its data using a new instrument called the Ka-band Radar Interferometer (KaRIn), which bounces radar pulses off the water’s surface and receives the return signal with two antennas at the same time. The antennas are spaced 33ft (10 m) apart on a boom, enabling researchers to gather information along a roughly 75-mile-wide (120-kilometer-wide) swath of Earth’s surface – a wider path than that of the satellite’s predecessors.

SWOT is being jointly developed by NASA and CNES, with contributions from the Canadian Space Agency and the United Kingdom Space Agency. JPL, which is managed for NASA by Caltech in Pasadena, California, leads the U.S. component of the project. For the flight system payload, NASA is providing the KaRIn instrument, a GPS science receiver, a laser retroreflector, a two-beam microwave radiometer, and NASA instrument operations. CNES is providing the Doppler Orbitography and Radioposition Integrated by Satellite (DORIS) system, the dual frequency Poseidon altimeter (developed by Thales Alenia Space), the KaRIn radio-frequency subsystem (together with Thales Alenia Space and with support from the UK Space Agency), the platform, and ground control segment. CSA is providing the KaRIn high-power transmitter assembly. NASA is providing the launch vehicle and associated launch services. 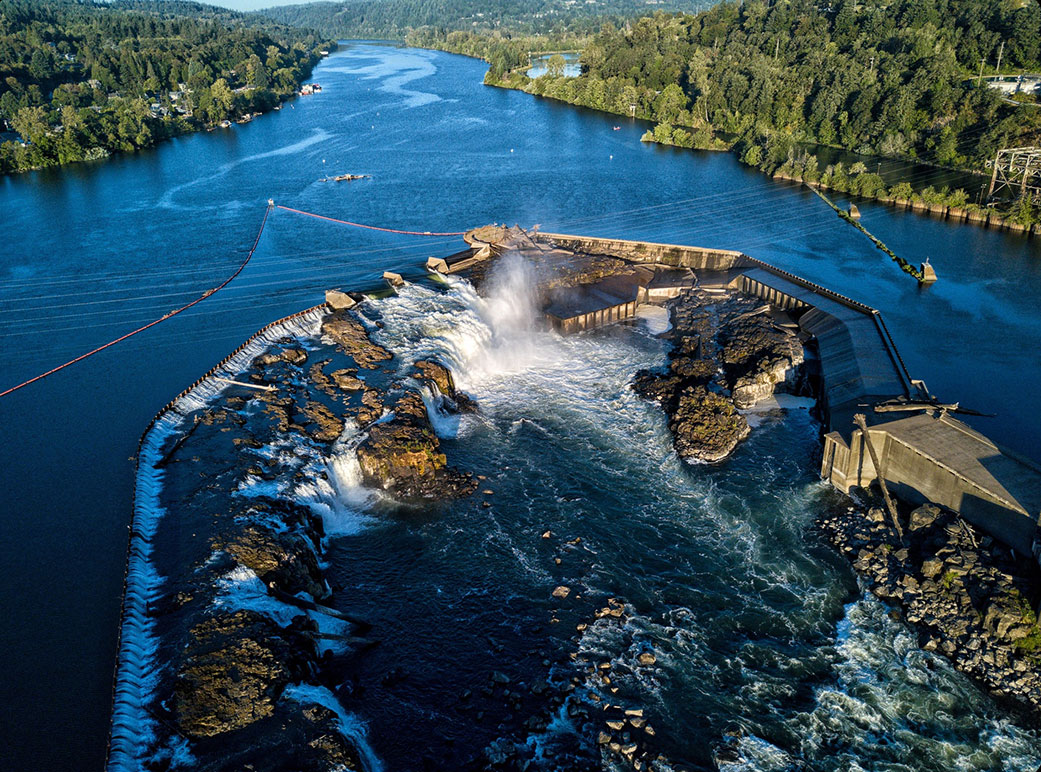 Once in orbit, the SWOT mission will regularly monitor not only large rivers like the Willamette in Oregon, US, pictured, but also smaller waterways that are at least 330ft (100m) across. Credit: US Department of Energy