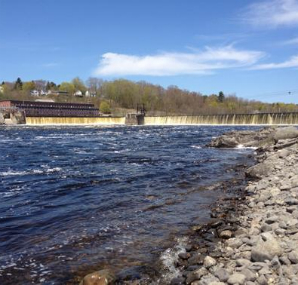 Contractors began work today to remove the Veazie Dam in Maine, US, in a project that will reopen the Penobscot River from Old Town to the sea for the first time in nearly 200 years.

The removal of the 830ft (253) long, 30ft (9m) high buttress-style dam, built in 1913, is a monumental
step in the Penobscot River Restoration Project, among the largest river restoration efforts in the nation's history.

Last week, contractors completed advance demolition work on the facility's smaller "Plant-B" powerhouse to prepare for the removal of the main dam.

With Veazie's removal, endangered shortnose sturgeon, threatened Atlantic sturgeon, striped bass, tomcod and rainbow smelt will have open access to 100% of their historic habitat in Maine's largest river and second largest in the Northeast

Combined with the Great Works Dam removal in 2012 and fish passage improvements to be completed at Milford and Howland dams, the Veazie Dam removal is a key component of the historic effort to greatly improve access to 1000 miles of habitat for endangered Atlantic salmon, American shad, alewife, and eight other species of sea-run fish.

For more than a decade, the Penobscot Indian Nation, seven conservation groups, hydropower companies, and state and federal agencies, have worked together - with broad community input - to implement an unprecedented plan to restore sea-run fisheries while maintaining hydropower generation.

Project partner Black Bear Hydro Partners, LLC, is completing projects to increase energy generation at six dams including the Stillwater and Orono dams that will maintain and likely increase hydropower generation supported by the Penobscot Project partners. Once Veazie Dam is removed, Milford Dam will become the lowermost dam on the river. Black Bear is constructing a fish lift at Milford and making additional fish passage improvements at dams elsewhere in the watershed.

“Black Bear is excited to develop new hydropower in the Penobscot watershed as part of the Penobscot Project's new balance between energy production and fisheries. We look forward to continuing our work with the Penobscot River Restoration Trust and other project partners to realize both energy and fisheries benefits for Maine," said Scott Hall, Vice President, Environmental & Business Services, Black Bear Hydro Partners, LLC.

The Penobscot Project's innovative public-private partnership is recognized internationally for its potential to restore vital habitat for fish and wildlife, expand opportunities for outdoor recreation, and support energy production in a large ecosystem. In 2012, the US Department of the Interior designated the Penobscot River as one of America's Great Outdoors Rivers.

"For the first time in 150 years, the Atlantic salmon run will naturally reach the Penobscot Indian Nation's ancient fishing grounds on the river that bears their name. When Atlantic and shortnose sturgeon, river herring, American eels, and other migratory fish reach Veazie, they will once again freely swim upstream. We are pleased to provide support for such a monumental and far-reaching endeavor," said Wendi Weber, US Fish and Wildlife Service Northeast Region Director. "The combined effort of many partners has led to success on the Penobscot and the Project has been hailed as a model for river restoration. Together, we have taken great strides to ensure that the river will provide enduring benefits for the people of Maine and the Penobscot Indian Nation."

"Removing Veazie Dam is the biggest step yet to open the river and rebuild the Penobscot's once abundant sea-run fisheries," said Laura Rose Day, Executive Director of the Penobscot River Restoration Trust, owner of the dam. "Credit for this historic milestone is due to many remarkable partners whose time, passion and resources are helping reconnect the Penobscot River to the sea. We are fortunate to work with so many committed people, towns, public and private funders, businesses and organizations to realize the Penobscot River's full potential."

Major support for Veazie Dam deconstruction comes from US Fish and Wildlife Service, National Oceanic and Atmospheric Administration, The Wyss Foundation, and National Fish and Wildlife Foundation. This work is also made possible by private support from foundations, individuals and other sources.