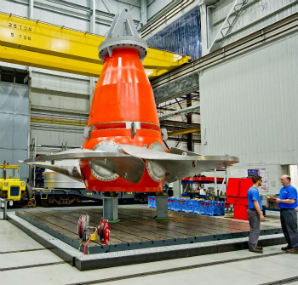 Equipment supplied by Voith Hydro is helping to enhance downstream fish passage at the recently completed expansion of the Holtwood hydroelectric project in Pennsylvania, US.

Voith supplied the turbines, generators, and automation components for the project, which more than doubled the century-old plant's electricity generating capacity. The $440Mexpansion by project owner PPL Generation will provide power to approximately 100,000 households. The project has been noted for its environmental enhancements, including improving both upstream and downstream fish passage.

"Holtwood is a terrific example of how hydropower development can not only provide jobs and clean energy, but improve the environment and surrounding habitats at locks and dams that have existed for decades," said Voith Hydro President and CEO Kevin Frank. "We are proud to have provided the fish-friendly turbines, generators, and automation equipment for this historic expansion of an iconic hydroelectric facility."

"This project, one of the largest expansions of its kind in the US, represents a major investment in clean, reliable, renewable energy," added Victor Lopiano, senior vice president of Fossil & Hydro Generation for PPL. "This project highlights the potential to upgrade existing hydroelectric facilities and expand capacity without the need to build new dams."

The new hydro powerhouse was built on the site of a previously retired coal-fired power plant. In addition to the increased capacity, PPL worked with local, state, and federal stakeholders to improve migratory fish passage, including numerous enhancements to the facility's fish lift system. The state-of-the-art Kaplan turbines that Voith supplied for Holtwood will enhance downstream fish passage as well.

"From the electricity users who will benefit from an increase in clean energy, to the workers who built the powerhouse and the turbines, to the surrounding environment and habitats, the benefits of expanding facilities like Holtwood are immense," Frank added.

Image: A Kaplan turbine manufactured at Voith Hydro's facility in York, PA, which is now in use at the Holtwood Hydroelectric Facility on the Susquehanna River.