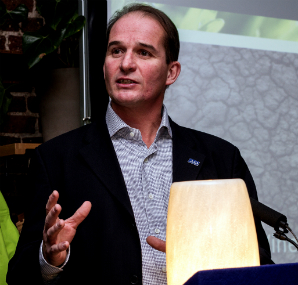 Dr David Viner from Mott MacDonald says that the hydropower industry cannot ignore climate change. In order for hydropower schemes to be climate resilient over their entire planned lifetime, he says that climate change needs to be at the forefront of design, feasibility, construction, operation and maintenance.

As the global economy recovers from recession, the demand for renewable, reliable and clean energy continues to grow. Hydropower plays an important role in many economies, including those in transition or pushing for stronger economic growth. After a downturn in the 1990s, the hydropower market re-bounded in the late 2000s and remains buoyant. It is estimated that the investment is currently worth over £40 billion per annum, amounting to a total of £1 trillion over the next 25 years. The reasons for this reinvestment are complex, but a key driver is the acceptance that a transition from carbon-intensive fossil fuels to low carbon renewable energy systems is essential for long-term sustainability. As a result, the World Bank and other international finance institutions are now fully supportive of hydropower schemes.

This has made international funders take note. For instance, the International Finance Corporation (IFC) has made climate business a strategic priority and has already invested $11 billion in 600 climate related projects since 2005, including the Adjaristsqali and Reventazon hydropower schemes in Georgia and Costa Rica. The IFC is looking to grow its climate business to 20% of its long-term finance and 10% of its trade finance by 2015.

Hydropower represents an excellent investment, with potential irrigation, flood mitigation, water supply, recreational and environmental benefits, as well as lower greenhouse gas emissions than most other forms of power generation.

If hydropower schemes are to function as designed, and provide these economic and social benefits, then the impacts of climate change need to be taken into account. The Intergovernmental Panel on Climate Change (IPCC) recently released its Fifth Assessment Report of our understanding of climate science, the impacts and adaptation, and mitigation issues. It reported that it is unequivocal that climate change is occurring and humans are playing a part through ever increasing greenhouse gas emissions. Current concentrations of carbon dioxide of over 400 parts per million is geologically incredible and the rate of change unprecedented.There is no credible science to contradict the findings of the IPCC and the wider scientific evidence.

Globally, thirteen of the warmest fourteen years recorded occurred in the 21st century, while May 2014 was the warmest May ever recorded. The impacts of warming on economic systems, food production and water resources are already evident. There is international agreement that a 2°C rise in global temperatures above the pre-industrial level will represent a dangerous threshold of climate change and we are already halfway to that target. Limiting the temperature rise to 2°C will require a reduction in emissions of over 80%.

Hydropower schemes deliver significant savings in terms of CO2 reductions. Currently it is estimated that globally hydropower delivers a reduction of 20% of emissions in terms of total electricity generation. According to the IPCC, if we are to meet the 2°C threshold then renewable energy production will need to account for at least 80% of total generation capacity by 2050. There is scope therefore for a further push for increased hydropower generation. Currently hydropower supplies 16.3% of the world's electricity, with an emissions factor of approximately 5% of fossil fuel generated electricity.

We are locked into climate change and we can expect to see the consequences on every continent. Therefore, it is no longer appropriate to presume that past records of precipitation and river flow will be a good basis for future predictions of electricity generation. It is imperative that when we start to assess the feasibility of a hydropower scheme the future climate is accounted for throughout the design and assessments of operability and maintenance.

The impact of climate change on hydropower generation is, however, a highly complex issue. Hydropower is driven by the hydrologic cycle and highly dependent on future changes in climate. In Europe, the IPCC review indicated that hydropower production is estimated to reduce by 6-36% as a result of changes in mean annual and seasonal precipitation, as well as increasing temperatures resulting in evapotranspiration losses, shifts in the share of precipitation falling as snow and the timing of its release from high elevations. In other areas, such as in the Himalayas, there may be increased flow during seasons with previously low flows as a result of the substitution of snowfall for rainfall due to higher temperatures. For example, drought can create electricity shortages with economic impacts where there is a heavy dependency on hydropower. The impact of climate change will be further compounded by increasing water demands due to changes in population and economic activities, especially irrigation demand for agriculture.

Changes in climate present risks and opportunities for infrastructure, both through long-term variations in existing climate conditions and changes in the severity and frequency of extreme events. There are numerous climate resilience risks in the hydropower sector, including:

Interdependence with other sectors, such as transportation, is a key issue as failures can cascade between infrastructure sectors and even national borders. It is equally important that the wider supply and demand side resilience is also addressed. It is no use having a fully functional hydropower scheme if transmission and distribution networks have been destroyed by a cyclone or flood, or transport failures prevent staff accessing the dam for inspections and maintenance. This is known as asset system resilience.

Finance and governmental institutions such as the European Union (EU) are currently developing climate change resilience in their policies, strategies and action plans. This has been strengthened by other legislation, such as the 2012 revision of the EU Environmental Impact Assessment directive, which strengthened the provisions related to climate change by requiring all schemes to take into account the impacts of climate change in the design, operation and maintenance during their lifetimes. Meanwhile the Global Investor Coalition on Climate Change, made up of global institutional investors responsible for over $22.5 trillion in assets, has stated that investors worldwide are currently taking actions to address climate risks and opportunities, including considering and addressing climate risks in their investments.

The result is that institutional investors, increasingly aware of the risks posed by climate change, are requiring risk assessments to be undertaken before committing to finance and planning. This is likely to create a requirement for the consideration of climate resilience in the development of hydropower and other long-term infrastructure investments, such as associated power distribution grids.