Preparing for the future: hydro licensing 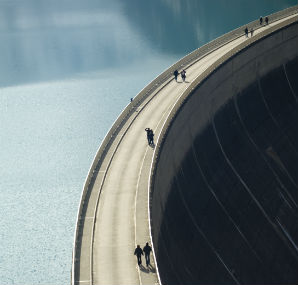 Mike Swiger and John Clements from Van Ness Feldman give readers an indepth look at the issues facing US hydroelectric licensing.

The US Federal Energy Regulatory Commission (FERC) expects to receive over 400 applications to relicense more than 16,000MW of hydroelectric capacity over the next 15 years. Many of these projects are being relicensed for the first time, and the vast majority are small projects of 10MW or less.

The length and expense of the relicensing process may put these projects at risk. The regulatory process for hydroelectric licensing is significantly longer and more burdensome than for other energy projects such as solar, wind and gas turbines. In addition, the core principle of the Federal Power Act (FPA) to centralise licensing authority in one federal agency (now FERC) has been weakened over time by overlapping and duplicative authorities of other federal agencies.

Efforts have been made to reform the licensing process. In 2003, FERC established the Integrated Licensing Process (ILP), which is designed to reduce delays by combining the application development and data-gathering phase for all needed permits and mandatory conditions in single pre-application proceeding with a defined process, strict deadlines, and a FERC-approved study plan. The ILP has likely reduced the need for additional information by FERC after a licence application has been filed, but it does not, and cannot, address the greatest cause of delay in licensing - the lack of timely action on applications for state water quality certification (WQC) under the Clean Water Act. There appears to be no solid evidence that the cycle of repeated submission and withdrawal of WQC applications for years after the FERC licence application is filed has changed in applications that use the ILP. The ILP also is a relatively "front loaded" process requiring a potential applicant and other parties to a proceeding to spend considerable resources at the beginning of the process. It is often challenging for small projects or new proposed projects where more schedule flexibility is needed.

FERC has also executed memorandums of understanding (MOUs) with several federal and state agencies intended to foster coordination and cooperation among the many agencies with authority over FERC-licensed and exempted projects. These MOUs may have the intended effect of increasing cooperation with regard to application development. However, they do not address the core problem that regulatory authority over FERC-licensed projects is vested in several federal and state agencies which often have a narrow scope of interest but authority to override FERC's overall public interest determination, for instance, with fishway prescriptions and threatened and endangered species. These agencies may also delay licensing by failing to act in a timely manner.

Congress itself has taken some measures to improve hydro licensing. The Energy Policy Act of 2005 provided for expedited trial-type hearings for disputed issues of material fact regarding proposed mandatory conditions by federal land management and fishery agencies. It also provided that agencies asserting mandatory conditions must accept an applicant's alternative conditions that meet certain criteria. Yet, as recently as 2012, FERC testified before Congress that:

"[T]he Commission operates under significant constraints imposed by the FPA, and by other legislation affecting the licensing process - the Clean Water Act, Coastal Zone Management Act, Endangered Species Act, and National Historic Preservation Act among them. In the absence of the ability to waive sections of the FPA and other acts, or to set enforceable schedules in licensing proceedings, it is not clear that the Commission, under its existing authorities, can mandate a shortened process."

The Hydropower Regulatory Efficiency Act of 2013 (HREA): (i) authorised FERC to grant a one-time extension to a preliminary permit for up to two years to allow more time to develop a licence application, (ii) increased the number of projects eligible for lightly regulated small conduit exemptions by allowing such exemptions for projects located on federal lands and increasing the maximum capacity for all such projects (whether owned by a municipal or non-municipal entity) to 40MW, (iii) increased the size of projects eligible for small hydroelectric power project exemptions from 5 MW to 10 MW, and (iv) created a new class of under 5 MW projects on non-federal lands that are non-jurisdictional.

The HREA provisions are a welcome expansion of eligibility for conduit exemptions, non-jurisdictional small conduit projects, and small project exemptions. However, the authorisation for FERC to extend the term of preliminary permits from three years to five years does not appear to change anything. FERC has turned its new authority on its head by interpreting its ability to extend permits as congressional intent that five years should be sufficient to develop a licence application. Ironically, this may hamper development if interlopers are able to take control of sites away from potential applicants who are diligently progressing toward a license application but cannot complete the process in five years.

Congress is aware of the issues facing hydro licensees and the current session may provide the most substantial opportunity for further reform in many years. Bills are being developed and have been introduced in the House of Representatives and the Senate. The bills would, among other things:

Regardless of regulatory reform efforts, anyone facing relicensing needs to anticipate hot button issues and costs:

It will also be vital to understand information gathering and study costs. What relevant information exists and what new information or studies are likely to be required? How much are anticipated studies likely to cost? For a small project facing its first relicensing, study costs alone, if not controlled, could render the project uneconomic.

Project economics will also be affected by other considerations. Will the project be eligible for renewable energy credits? Are long-term power sales agreements obtainable in the regional wholesale power market? Will a peaking project remain economic if it is required to change to run of river?

A thorough understanding of these considerations well before the formal relicensing process begins with the Notice of Intent to relicense will enable the licensee to identify and evaluate options. For instance, if the project is economically marginal under anticipated power market conditions, it may be appropriate to compare potential costs and benefits of a new license to the costs of decommissioning the project. Decommissioning costs may vary dramatically from state-to-state, depending on whether state regulators have authority to require dam removal and what conditions they may be able to impose on continued operation of a non-power dam. If the project includes multiple developments, there may be advantages to splitting it into separately licensed or exempted developments. Alternatively, it may make sense to combine multiple projects of the same license on the same river into a single license.

It is likewise important to consider which of FERC's three licensing processes is best suited to the project. The default ILP is front-loaded, schedule driven, and requires intensive participation from all interested entities, including FERC staff, during development of the licence application. The Traditional Licensing Process (TLP) has few deadlines and does not involve FERC staff until the licence application is filed. It may be more suitable for projects that are less likely to be controversial or expected have fewer issues. FERC also may permit a licensee to use the Alternative Licensing Process (ALP) in which the applicant and all relevant agencies, tribes, and members of the public attempt to resolve differences and develop a draft NEPA document on a collaborative basis. The applicant must receive FERC authorization to use the TLP or ALP. The choice of process may have an important effect on study costs and the timing of decisions.

In sum, under the FERC relicensing regime, even as it may be improved by current reform efforts, it is important for licensees to identify well in advance the issues and potential costs and economic benefits of the project so they are able to make informed decisions on how to proceed.

Mike Swiger is a Partner and the Hydroelectric Practice Group Leader of Van Ness Feldman, LLP - a law and policy based in Washington DC and Seattle. He represents a broad cross-section of entities with interests in energy and water development before federal agencies, the presidential administration, Congress, and the federal courts. In more than 30 years of representing hydroelectric project operators and developers, Mike has been involved in several major hydroelectric licence proceedings before the Federal Energy Regulatory Commission (FERC), appellate litigation in the US courts of appeal and Supreme Court, and agency trial-type proceedings.
Among others, he currently represents FirstLight Hydro Generating Company in relicensing of a 1192MW pumped storage project and a conventional project on the Connecticut River. He has served as Chair of the Renewable Energy & the Environment and the Hydroelectric Regulation Committees of the Energy Bar Association, is active in the National Hydropower Association (NHA), and has written and spoken extensively on regulatory and environmental issues affecting energy and water development. In 2014 he received NHA's Dr Kenneth Henwood Lifetime Achievement Award.

John Clements has been Of Counsel at Van Ness Feldman, LLP since 2006 and specialised in hydropower licensing for 30 years. He is currently involved in relicense proceedings before FERC, development of new projects, licence implementation and compliance, and appellate litigation in the DC Circuit Court of Appeals. Among others, John represents Missouri River Energy Services, which is constructing the Red Rock Project at a US Army Corps of Engineers dam on the Iowa River. John is a regular panelist at industry conferences and seminars. Prior to joining the firm, John served as the Office Director and Director of Licensing in FERC's Office of Hydropower Licensing during an unprecedented wave of over 200 relicensings, as the legal and policy advisor on hydroelectric matters for three FERC Chairs, and as a senior hydroelectric attorney. John wrote the regulations for the Integrated Licensing Process, FERC's default licensing process rules.